Page to Screen: A Monster Calls Siobhan Dowd and Patrick Ness' book was released in 2011, and is deliberately listed as being for “children and adults”. It is a rare approach but completely accurate for its story. A bullied teenage boy, whose mother is seriously sick with cancer, is visited by a monster. The book won prestigious literature awards, and was on many “book of the year” lists. It was made into a film in 2016.

From page to screen will address the edition of the story illustrated by Jim Kay, and will not cover the 2018 stage adaptation at The Old Vic, because I didn't see it.

“And now it's time to hand the baton to you. Stories don't end with the writers, however many started the race. Here's what Siobhan and I came up with. So go. Run with it.

The almost pitch black cover of A Monster Calls, with a gigantic tree-like creature towering silhouetted over a small house, sets the foreboding tone of the text within. Thirteen year old Conor is suffering at home and at school. While his mother is in and out of hospital for cancer treatment, he has to spend time with his Grandmother, and the two have a strained relationship.

Conor's father lives abroad with his new family, and Conor is seemingly all alone, until a Monster calls. This hulking, talking tree beast crashes into Conor's life, telling stories of his long past and demanding a truth from the young lad. As the Monster's tales twist like twine around Conor, he is suffocated by the real world, too. Floundering, flailing angrily, lost in the woods, seeking his truth.

Patrick Ness' text is accessible for children, and devastatingly understated for adults. Combined brilliantly with Jim Kay's artwork, which weaves around and frames the prose, A Monster Calls is engrossing to say the least. The artwork is so superb that it is allowed as much paper as the words of the story. It would be an embittered critic who found fault with it all.

It is a sad, yet inspiring read; but there's more to it.

What Ness' earlier quote refers to, is not just the philosophical issue of authorship, but also that he was passed the baton himself. By Siobhan Dowd, the writer who conceived of the story before she died of breast cancer- at only forty seven. It is not difficult to see where her inspiration for A Monster Calls comes from, and it adds raw, thick roots which ground the fantasy in painful reality. 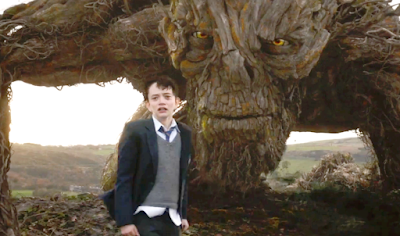 Although it deals with the concept of losing a young mother, A Monster Calls is symbolic of the struggle everyone faces when losing a parent. Or a loved one. Whatever age they may be. Loss is loss and no amount of rationalising or putting it in different boxes will temper the searing pain that grief inflicts. Ness is well aware of the challenges to different ages, Dowd was mortally aware of all aspects, and Kay perfectly pitched those emotions in art.

There were several main challenges faced by the creative team charged with bringing A Monster Calls to life in the cinema. These were, including but not limited to, how to keep the tone without alienating either adults or children, and how to respect the source material's iconic, symbiotic style and substance without being a simple homage.

Hiring director J. A. Bayona was a wonderful start, his ability to broach difficult subject matter with wide (and suitable) appeal was painfully evident to anyone who saw The Impossible. That film amazingly received a 12 certificate in the UK, despite covering the real life death of thousands, and featuring several gruesome, upsetting scenes. There is nothing explicitly gruesome in A Monster Calls, just the terrifying inevitability of mortality.

The film's artwork, a smooth blend of 2D and 3D animation with live action, is a seamless transition from the book. On Screen A Monster Calls is beautiful in its own right, but still recognisable to fans of its paper parent. Like all good cinema which grows from the page should, it builds on the words. Bayona's film works the symbolism of the novel on to the screen in a way that, while slightly heavier handed, fits the medium well. 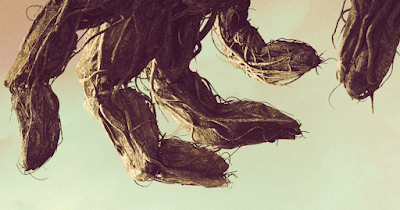 What is striking, perhaps most striking, is the subtle genius of the effects. Yes the Monster is a well rendered CGI beast, but it is the production design and make up which are most effective. Conor's world appears almost so flat, bland and banal as to be noteworthy, which strikes home the message of both the novel and the film. The Monster is the escape, the conflict and the cure, possibly.

Anyone who has seen the horror and annihilation chemotherapy reaps on cancer sufferers will identify with the make up and soft destruction inflicted on Conor's Mum (we never hear her name). Her simple decay and the ordinariness of the world it happens in, contrasting with the vibrant, fantasy world the Monster brings to Conor, is excellent film making.

A Monster Calls' big screen appearance places horror in the real world with a gargantuan gentleness of touch. The audience can feel for the boy, as he struggles, torn between these two worlds which encroach on one another. Both book and film focus on loss but more, the fear of loss. Something much overlooked.

Fear is a terrible, destructive thing. Much like a monster might be. Impossible to avoid in many ways; if you let it fear will find a centre in you, it will chew it up and leave. If you let it, it will reap irreparable damage known only to you. What A Monster Calls speaks to so potently is that we are all that child; we are all Conor. We all feel so vulnerable and pathetic in the fear of saying goodbye to someone we love. Most poignantly, we all feel guilty for feeling like that, for the selfish sorrow.

None of us wants to speak our truth, not really.