As a teenager I did my mandated work experience in a hospice. It’s only looking back and talking to people I realise how unusual that is. Some of my mates worked in train stations or WH Smiths (surely just free labour-these days they’d call it an internship), but I blithely wandered into a place custom built for people who know their days are numbered. And I fucking loved it. People staring death in the face are fascinating to be around and while that is morbid, don’t lie, we all want to know what that feels like and how to deal with it when it inevitably hits our existence.

Don’t Look Up is about humanity and its devotion to denial and distraction, as two Astronomers, played by Leonardo DiCaprio and Jennifer Lawrence, try to convince the world that an asteroid is due to hit and end things. They seem pretty convinced and honestly there’s little tension in believing them, the film is about the farce of making the world face the truth. The world’s going to end and nobody is paying attention!

Husband and wife in the film, Leonardo DiCaprio and Melanie Lynskey would be an amazing real life couple. Probably. Maybe. I don’t know either of them of course but for wild speculation, yeah, LeoNie 2022 baby! Every actor gives their all in Don’t Look Up, and I don’t know who Mark Rylance is channeling but it is remarkably creepy, he’s brilliant as Peter Isherwell, a tech mogul rolling the dice in increasingly higher stakes. Streep and Blanchett are both worth the entrance fee monthly subscription too. 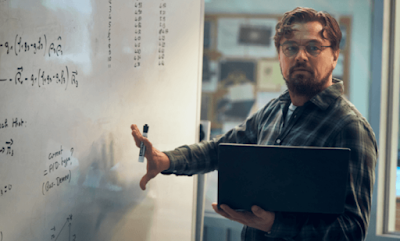 With obvious environmental overtones, Adam McKay’s film isn’t deft in meaning or really in delivery. It’s like Armando Iannucci wrote Deep Impact, but got a bit bored and slacked his writing off, leaving too long between jokes and failing to properly engage the audience. Despite the hands down best ensemble cast of the year, Don’t Look Up made me laugh but failed to properly make me care about the end of the world. It’s all pretty obvious but moderately fun. Until the end.

Pizzazz and whizzbangs and music and jobs and TV and having kids and watching things slowly change and fade and expire. Getting used to that isn't fun but it is where we are. Bacon is a metaphor for life; it came from death, is delicious for a moment, but like all experience it rots. Don’t Look Up asks, with all this horrible media and fame and technology, is this a world worth saving? Life is just a distraction before death, and our choice is only, perhaps, how to face up to that.

A little bit on the nose (read unsubtle) commentary in places, and overtly telling us we’re doomed in a meta way, but while it wanders and could probably cut half an hour, Don’t Look Up really caught me at its end. Why they released it at Christmas is beyond me. 6/10
P.S. Happy Christmas, you’re going to die