The new Candyman, recently out in cinemas, looked very promising and I was desperate to see it. But guess what, I haven’t seen the new one, for no other reason than that I’m stupendously lazy. Fear not, I thought, because the 1992 original is on Netflix and I had strong memories of being very on edge watching it some years ago. Although, as I frequently discover rewatching films, my memory sucks a big old bag of spanners. Old spanners are worse than new spanners, way less sexy but just as hard to chew. Also rust and that.

Virginia Madsen is Helen, a journalism postgrad investigating local myths and legends. One legend in particular has her all giddy, The Candyman. A myth which involves summoning the eponymous, murderous man with a hook for a hand by saying his name three times in the mirror. The film wouldn’t work if the legend didn’t have something in it and The Candyman (played by the legendary and prolific Tony Todd) duly turns up creating cadavers for Helen to investigate, promising to tear you from your “groin to your gullet”.

Todd has a brooding omnipresence to his performance which the film thrives on. Somewhere between supernatural and wholly real, the Candyman violently fucks fables into fact .

Just an observation, but she doesn’t seem like a very good reporter, Helen. She always runs out of film and has clearly done no research whatsoever, meandering semi-aimlessly into increasingly dangerous situations. I do appreciate that if she didn’t put herself in any danger it wouldn’t be a very good horror film. Helen is married to Trevor (Xander Berkeley). Trevor is a creep. Trevor also has to be in the top ten least sexy names of all time- others include; Keith, Donald, Adolf, Ethel, Mildred and Mum. 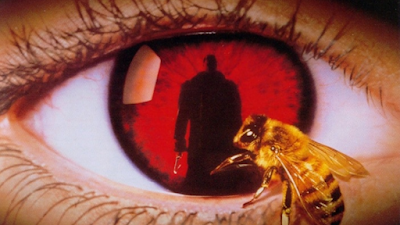 Virginia Madsen is a very good looking woman but I found myself getting weirded out by her ears. Have I just discovered there’s something wrong with me? I was rather fixated on them, and not in a fetishised way, more out of confusion. Talking of fetishes, you’ve got to love Clive Barker, he’s an exceptional, unique horror talent; but Barker does love a bit of sadomasochism. Much like Hellraiser, Candyman has an obsession with the sexualisation and glorification of pain. For me it's a difficult wank.

The film is a fairly unsubtle allegory for gentrification/ white privilege, but it works anyway. That sounds like an clash of opinions but I don't know how to say it better, I'm just a writer. Candyman is very well shot, particularly the grimy run down ghettos, splashed with graffiti, the rotting remains of some domiciles long ago abandoned clashing with the house-proud sanctuary of the residents still in situ. The vacant apartments almost literally a gateway to the underworld, exceptionally creepy locations which had my hairs standing up.

Candyman remains scary, effective and its subtext is sadly still applicable to today’s world. Perhaps that’s what is most horrifying. I wonder how much the remake can add to a still relevant social commentary. I haven't seen the new one, because I'm so lazy I didn't read this review back to myself. 7/10