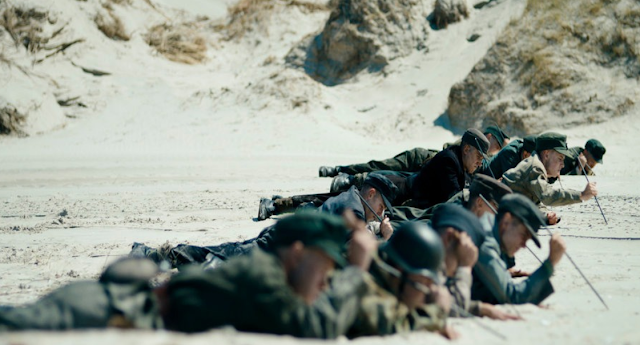 Danish war drama Land of Mine had been one I’d intended to see for ages but as is with many films, and I’m sure this is true for us all, it rested by the side of the metaphorical road for a while. What’s your “I know I need to watch” list like? I bet it is a huge and guilty pit of neglect like mine. Beasts of the Southern Wild was a brilliant example of why I should reach into the dust. Conversely Tora! Tora! Tora! was exactly the ammo for my unease; about as much fun as getting a handful of broken, tramp, piss glass- but more boring.

Land of Mine tells a story moored deep in a part of the Second World War, or rather post war, I was totally ignorant of. So convinced of an Allied invasion via the Scandinavian coast, the Germans laid landmines up and down any potential landing zone like profligate pyromaniacs. Post war, when sympathy for German soldiers was understandably not exactly de rigueur, clearing the foot throwing, limb loosening, murdering little motherfuckers from said beaches was subcontracted to the remnants of the Reich.

By subcontracted I mean made to undertake at gunpoint and with zero care for their lives. Intense from the word go, Land of Mine just wants you to know this isn’t going to be easy, or go where you might want. Leftover German infantry serving in Scandinavia weren’t what you might call the A Team by the end of the war, and the small group featured in the film are barely more than boys. The viewer and the Danish soldiers around them must come to terms with their humanity and innocence, yet somewhat complicity with the situation they’re in. 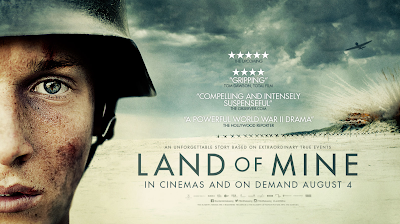 These lads are not popular with the locals, as they wiggle their way along the beach softly prodding for a hidden ticket to the underworld. Overseen by the unsympathetic Sergeant Rasmussen, played by the Danish Daniel Craig- Roland Møller*, the boys flounder. Don’t worry though, the English turn up, proving that our reputation as dicks abroad holds as firm as our love for self sabotage. Europe hates us and they have decades of evidence to validate this. The Tommys in Land of Mine are less likeable than the Germans.

Even an idiot can surely comprehend war isn’t all black and white. But, it is also entirely understandable to see why as a symbol of Hitler, there was a desire to punish these people. Hatred and hypocrisy know no logic and if you’ve half a heart, it’ll be in your mouth by the end of this tense yet quietly, subtly, engrossing and affecting film that hints at the never ending road of rage war creates.

Land of Mine isn’t an all action war film, it is stressed and nervous and human. Very good at keeping you off kilter, unsettled and as fraught as the soldiers. This is a film for war film fans and people who don’t like war films- a relatable drama which leans on how much you can love other people. 8/10