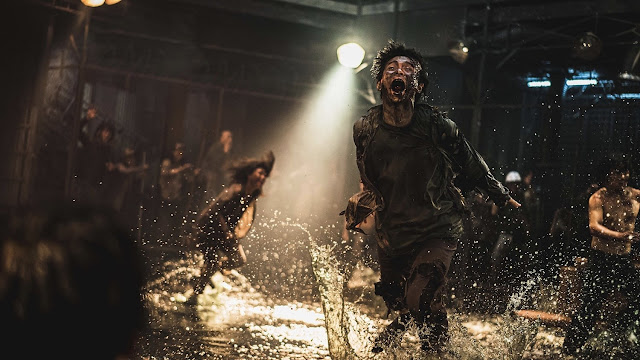 2016’s Train to Busan is a Korean zombie-action film set almost entirely, you guessed it, on a train. The enclosed space adds a claustrophobia to the carnage and the film was rightly praised, it’s great fun.

I’ll admit up front that Train to Busan Presents: Peninsula (Peninsula from now on) has a poor IMDb rating, but the trailer looked bonkers so I wanted to see it. It was one of those nights where you’re knackered from work, it’s cold and wet outside and you want to switch off to a film; no concentration required. I expected, nae hoped, for nothing more than unabashed action and gore. I know you all have those nights. Braaaaaaains.

Peninsula’s plot occurs four years on from the original Train to Busan film. There is another sequel but I haven’t seen it and honestly you don’t need to have seen either of the previous two before watching Peninsula, it is a standalone story with no cast/ character crossover. The virus has caused Korean society to collapse. There are rumours this virus was engineered and conspiracy abounds but that’s completely irrelevant to anything in the real world right now.

What is ironic, is that I’m pretty sure South Korea has dealt better with COVID than any other nation in the world. In Peninsula they’ve cocked it right up. 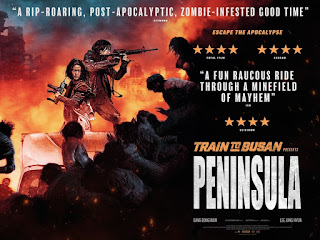 Former soldier and zombie town escapee Jung Seok is strong-armed into returning to the rotting region to find a MacGuffin in the form of money for the Mafia. He meets survivors and fights people and drives and there’s zombies and mercenaries and lots of noise and guns and gore and cars and oh yeah there’s also the reanimated, hungry ex humans spilling out of every dark door. I've seen complaints online that Peninsula is nonsense and I even saw one guy who moaned that the cars take too much punishment in the chase scenes to be realistic. Look, if realism is what you’re taking umbrage with while watching a big budget zombie sequel then you’re a moron.

This is very much a big budget blow-out. It’s silly, funny, gory and exciting. The humour is welcome, Peninsula is not a film that was ever in any position to take itself seriously. I am a big fan of the Korean sense of humour. South Korean anyway. The funniest thing about North Korea is… actually no I’m not touching North Korea, I’m sure they’re all hilarious. The haircuts definitely are*.

Peninsula reminded me a lot of Land of the Dead, which isn’t a terrible thing. To be compared to the legendary George A. Romero is never bad, it’s why George Lucas has that beard. What Peninsula is is a heist movie, with zombies and car chases. Which might be something of a new sub-genre, though I imagine The Simpsons did it. Think Fast and Furious with zombies, that’s how I’d pitch it, which is lucky as it’s me writing the review and I had to think of a way to pitch it. Fast and Furious with zombies, I’ll admit, isn’t for everyone. And that’s why I’m single.

Trash, but fun trash. Good trash. Big budget trash. This isn’t finding a half full bottle of JD on the street trash, although that was also a good day. Peninsula never tries to be anything other than fast paced, over-the-top fun. Fun it is, and it made my evening almost perfect (it was a school night so I had a wake up time the next day). 7/10