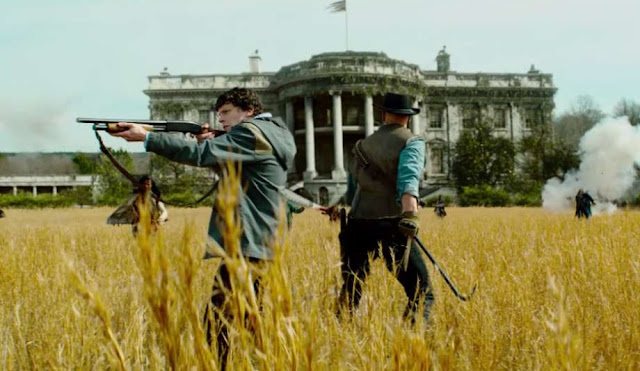 Zombieland: Double Tap (2019)
Spoiler Free
Horror/ Comedy
Rated 15
Newly available for home viewing
Ten years after Zombieland, the gang are back. Tallahassee (Woody Harrelson), Columbus (Jesse Eisenberg) and Wichita (Emma Stone) all look the same age as they did in the first film, but it’s a little harder for the filmmakers to hide Little Rock’s (Abigail Breslin) change from 13 to 23 years old- although in the film she’s presented as still around teenage age.
A few new characters are thrown in, as you’d expect, and the story sees the gang hit the road again for various reasons. I particularly liked Zoe Deutch as Madison, a stupendously thick blonde woman who seems so stupid it’s impossible to imagine how she’d have survived a zombie apocalypse. She does make for some good jokes and I had to remind myself to chill, this isn’t a documentary, put the Zombie Survival Guide down. 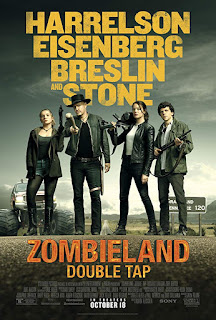 Although the zombies in Zombieland aren’t really zombies, the film’s humour does alleviate that. Adding levels of intelligence to the ravenous cadavers makes for some good jokes and is no different to what, say, the game Left 4 Dead did in order to keep things exciting. On that, Zombieland: Double Tap is exciting, not thrilling, but definitely fun. It is not scary one iota though. In fact if it wasn’t for the zombies it wouldn’t qualify as a horror. Again not really a complaint, more an observation.
The action is fun and so is the gore; supported by good VFX work and nicely staged show downs. Zombieland: Double tap ticks along at a decent pace and I did like the camp of survivors they find later on. However it’s all a bit predictable and there was very little tension, the film is entertaining but nothing more. If you liked the first one, you’ll probably sit through this fairly contentedly. If you haven’t seen the first one, it really doesn’t matter.
Bedsit it?
Although they leave the door open for a third film it really doesn’t merit one on this showing. Zombieland: Double Tap is fun but where the original was exactly that in its presentation and ideas, this is mostly just a reanimation of it- which is to be expected in a sequel. Untaxing entertainment. 6/10 Try these other reviews from Bedsit Cinema...
Labels: Abigail Breslin Adam Thorn Bedsit Cinema Comedy Double Tap Emma Stone Film Lover For Your Eyes Only Horror Jesse Eisenberg Movie Review Woody Harrelson Zoe Deutch Zombieland Zombies