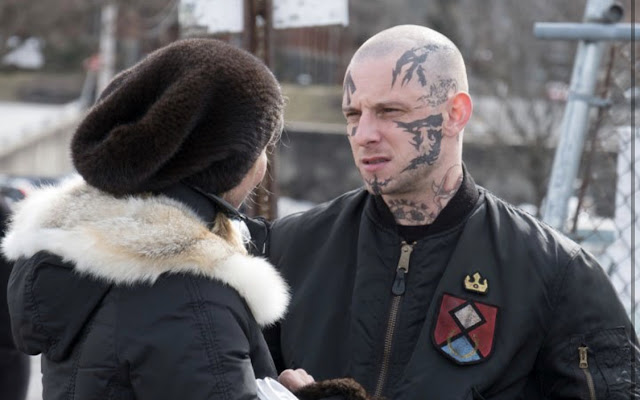 It has snuck under the radar somewhat, and perhaps why is that most people my age will see the synopsis of Skin and just think of American History X. That presumption isn’t too far wide of the mark, but while the stories share similar themes, Skin is very much its own film.

Jamie Bell plays Bryon Widner, a Neo-Nazi who begins to doubt his allegiances to his proud and prominent racist family. The man is well known and popular with the group, his relatives and a wider “family”, and has all the tattoos to display his devotion- including some rather hideous ones on his face. Of course they’re all hideous because racism is hideous, but the face?! This is of course where Skin gets its title.

Unaware it is based on real life when I put it on, I’d say keep yourself in the dark (not a slur) before watching Skin, too. You can always look more into Bryon Widner’s life afterwards. It isn’t entirely what you think it might be at first glance, and a little bit of ignorance helps the surprises carry more weight. 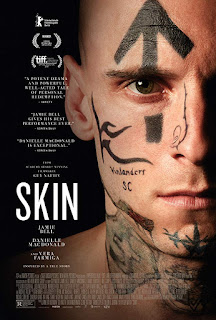 Bell is fantastic in the role. He gives Bryon a fierce and scary side, but also a compassion which evolves as the film goes on. Denielle Macdonald is also excellent as Julie, another right winger who skirts the edges of extremism.

Directed by Guy Nativ, who I have to say I knew nothing about* largely because most of his films are Isreali. My knowledge of Isreal’s cinema output extends to the brilliant duo Big Bad Wolves and Waltz with Bashir. Nativ does well with Skin, it is very believable and even though I felt I knew where the story was going I was still gripped throughout. It is well made and acted that you won’t care even if you do think the story feels familiar.

In a word, yes. Skin’s main problem is that it lacks a defining moment or scene (“bite the curb” for example) but is solid cinema with a performance which could see Bell’s career broaden and Macdonald become more well known.
As I said, I very much advise you to go into Skin cold (except for this review). 8/10

*Although he has won an Oscar? So my bad, I should know him.