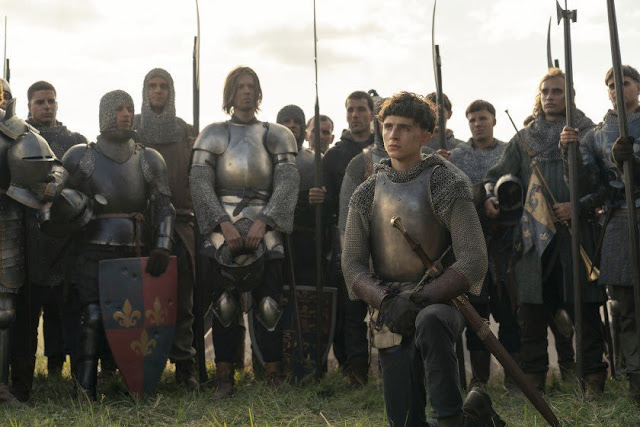 Boasting a great cast, a director I like and an interesting premise; David Michôd and Joel Edgerton’s Netflix hosted reworking of William Shakespeare’s Henry V was one I was looking forward to. Doing away with all the Bard's pointless flowery language, The King was clearly intending to be accessible, and it is. Sort of.

I suppose loosely The King is “history” but Henvry V was written by William Shakespeare who was born one hundred and forty years after Henry V died, then adapted by two Australians born in the 20th Century. Basically it’s about as close to history as me writing a film about James Clark Ross discovering Snow Island, then asking two space Australians in the future to adapt it. All without my using the internet, where I found out on Wikipedia that James Clark Ross discovered Snow Island one hundred and forty years before I was born.

Timothée Chalamet makes for a very sultry and effeminate Hal, a young king who is forced to grow into the role. He is advised and assisted by Edgerton’s Falstaff and Sean Harris’s raspy, Rasputin-like William. On that, has Sean Harris seen an ENT specialist do we know? His smokey, snake like speech is effective but the man more and more sounds like Ned from South Park.

Robert Pattinson’s ludicrous Dauphin was apparently deliberately made incredibly camp, and he does provide comic relief- but not in a good way. He looks and sounds like a French pantomime vampire.

The King looks great in places and is not without its moments (off with his head!) but it is two hours twenty minutes long and never really feels like it peaks anywhere.

The King’s finale feels somewhat aimless, flat and lacking decisive drama despite the nice muddy visuals of the battle*. As it all draws to a close I realised I didn’t hate it, I wasn’t unhappy I watched it but I have no desire to return. Worth a punt in a bind. 6/10