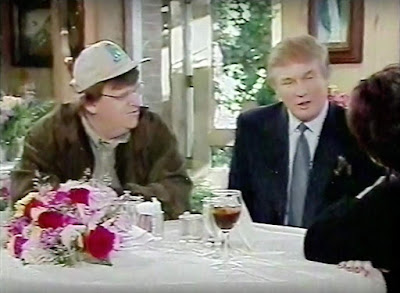 “Yes, but I think my dog is hilarious, and he humps everything too, I’m not going to vote him President.”
Words between a Las Vegas taxi driver and me

Let me start by saying that most Americans are great. Not that cab driver though, obviously.

I’ve been to, I think, at least sixteen States and America is a beautiful country with many wonderful people. I love it there and I’d happily live in much of it. That sounds mad to dogs and Englishmen but look, you’re farther from Donald Trump in many parts of America than you are from his consequences in the UK, and Boris Johnson.

Michael Moore is America’s liberal Socratic electric ray; pissing people off in public to make a point. He is unsurprisingly divisive, particularly in America. Nonetheless, Moore carries growing importance. For all his righteousness, it must be remembered when watching Moore’s films that he is equal parts entertainer and investigator. Sometimes he’ll go for amusement and effect over pure high brow contemplation.

While Fahrenheit 11/9 goes into the ins and outs of American politics in a rather revelatory way- the feeling from the first frame is that Moore is preaching to the converted. This is sad, because he has some good points, but flip the politics and it’s easy to see where he might lose viewers, especially on a platform such as Netflix where commitment to entertainment is as throwaway as internet dating and shopping and soon life. When Dignitas stop asking for money, anyway...

Moore’s good points, as ever, are his cross party interest in humanity. The dickknuckles he picks at are worthless warts who shockingly for lefties turn out to be insidious and pervasive whichever desperate way one with hope may look for help.

A lot of what Fahrenheit 11/9 rails at is the horrible human cost of greed. The Flint water horror, gun crime and countrywide exploitation of teaching staff all form peaks in this documentary on an America Michael Moore tries to view with hope. Tries, but supplies enough information (not ammunition) for you to love some of humanity, but simultaneously fear for it.

Hope is the drug of the damned.

Bedsit it? Like Fahrenheit 11/9 I imagine I’ve got a smaller audience this late on.

As my hope* dies, the passion has petered out in my writing and it shouldn't have. The biggest horror of Fahrenheit 11/9 for me is that its fire will burn only in the kindling, not the stubborn logs. Certainly Moore’s most important film to date, see it ASAP. 9/10