Trailergeddon 3: Everyone Likes a Threeway 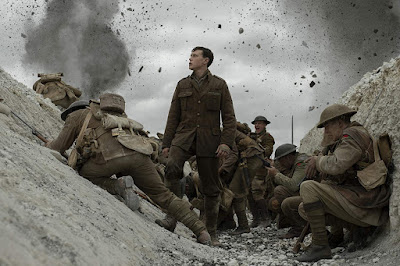 We’re approaching the end of the summer blockbuster season, which can spell certain doom for cinematic treats as the megahits fade away and award bait is incubating. Fortunately trailers are our crystal ball to the future, a heavily edited glimpse of what’s to come.

Although we all know trailers are evils lies. Like custard adverts, sold to us on the promise of so much joy until you invest and realise it’s just fucking custard. Where we find the happy is revelling in the intangible, happy hope. A two minute glimpse of what might be.

There is an obvious dearth of high art in these trailers, as Oscar season sits at the end of the year. Personally, I am rather excited about some of these films- Academy be damned!

Just because I thought it’d be fun, here are the films featured on Trailergeddon 2: Let’s Geddit On, alongside a brief summary of the film.

Polar - Utter, unoriginal nonsense
The Mule - I got bored and turned it off
How to Train Your Dragon: The Hidden World - I’d forgotten this film even existed
Arctic - to be fair I didn’t have time to watch the DVD before it was due back
John Wick Chapter 3: Parabellum - Not seen it yet
Us - Perfect example of trailer lies. A boring film saved only by the acting (from a 3/10 score to a 4)
Ghostbusters 3 - Not out yet AND I STILL CAN’T WAIT
Into the Spiderverse - Clever and fun
Godzilla: King of the Monsters - Again not seen
Hellboy - Jesus fucking christ I need to get out to the cinema more
Pet Sematary - I bought the original instead
The New Mutants - delayed until 2020, looks good but will real life ruin it? It did Dark Phoenix

That list really does nothing for trailers does it, but that ain’t the fun of them, the fun of trailers is the trailer, and so behold- TRAILERGEDDON 3!

Scary Stories to Tell in the Dark

Guillermo del Toro writes and André Øvredal who directed the magnificent Troll Hunter, directs. Title is self explanatory, has a Children of the Corn look to it which I like.

Sam Mendes directs a WW1 action epic, it looks more like a Dunkirk style affair than traumatising Saving Private Ryan effort, but I’ll forgive that because it looks superb.

The Firefly family return! Rob Zombie’s two best films get a third instalment and it promises carnage on a terrifyingly satisfying scale.

The 1990’s Addams Family films are two of my all time favourites, and the first trailer for this new animated effort did not please me. It does in the longer trailer, however, look a little more offbeat than the teaser, so perhaps I’ll give it a chance. See what you think...

One which might be after awards- if the Netflix debacle doesn't derail it, good film or not.

Martin Scorcese, Robert De Niro, Al Pacino, Joe Pesci and many more unite for a mafioso movie of unparalleled anticipation. Put it away mate, we’re all excited too but have some decorum.

23 August (UK), Cinemas (probably not loads of them but some cinemas)

He’s back! Along with some serious looking new Terminator models, Arnie and team return for what looks as if it might actually be a decent Terminator film. They haven’t all been awful, but the Terminator series had a high benchmark to keep up to. Deadpool director Tim Miller is in the driving seat.

From Robert Eggers, director of the unique, bewildering, batshit and brilliant horror The Witch, comes a, you guessed it, unique and batshit film about a lighthouse. It sounds like there’s very little to it except for style. The style, though… Willem Dafoe and Batman star.

Yes it looks like I Robot 2, yes Will Smith is getting on everyone’s tits- but Ang Lee directs and lets face it, Gemini Man looks pretty fun.