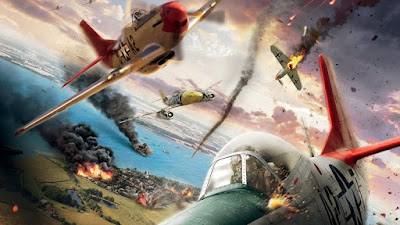 After the resounding failure that was watching Fortress recently, I nervously returned to the skies for the not exactly well loved Red Tails.

From the get go it’s pretty clear Red Tails is not going to be deadly serious. There’s a knowingly cheesy element to the acting, the opening credits are war-movie-retro and the whizz bang action is set up for fun rather than gritty realism. No guts, no glory, gung ho, up and at them action.

“Experience is a cruel teacher, it gives the exam first and then the lesson.”

A George Lucas passion project, perhaps Red Tail’s style is not a surprise. If you think of it as Star Wars does WW2 dogfights, tonally (I’d argue) you’re about right. Much like Hurricane, Red Tails is based on a true story about institutional wartime racism. The Tuskegee Airmen were black pilots denied front line action due to the horrific and inaccurate belief that the colour of their skin impaired their ability and character. It's no laughing matter, but a topic the film doesn't dwell on.

Red Tails prefers to bask in the bravery of the pilots and the thrill of flying than wallow through the political and race element. It's accepted early on, racists are dickheads, give them no time and move along.

Apparently Lucas had trouble getting the project off the ground (arf) in the 1980s because the studios didn’t think a film with a black cast would be successful. It’s a sad reflection of the issues the Tuskegee Airmen faced themselves- white guys deciding not to back something based entirely on the colour of the talent. 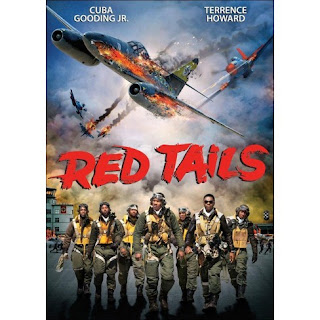 Despite studio prejudice, and thanks to a large sum of his own money, Lucas eventually got Red Tails flying with a jaw dropping cast and a proven TV director in Anthony Hemmingway (The Wire, Treme). I’ll admit Method Man might not be everyone’s thespian of choice, but few can argue with David Oyelowo, Terence Howard, Cuba Gooding Jr., Nate Parker and Michael B. Jordan. They all joyfully sell this airborne action romp.

It isn’t without its drama and sadder moments but Red Tails thrives in the sky, as fighter plane fights fighter plane and the heroes whizz about wrecking Luftwaffe property. Nobody making Red Tails had any intention other than providing two hours of fun to the viewer. They succeeded.

Bedsit it? The IMDb rating of 5.9 (at time of writing) suggests to me that people expected something they didn’t get because as an action film Red Tails does little wrong. You could argue that it doesn’t treat the subject matter seriously enough, but I’d argue you’re a dour cunt, missing the point, who needs to chill out.

I loved Red Tails, A very strong 7/10 with the possibility of repeat views knocking it upwards.