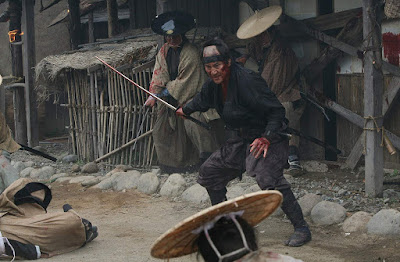 Samurai action is a favourite of mine. I’d been meaning to watch 13 Assassins for some time but the DVD store didn’t have it so I did an Amazon Marketplace used version for pittance. Sorry tax Gods, paucity of pennies trumps morality. The DVD arrived and on my day off I excitedly put it on. Within about half an hour I realised I’ve seen 13 Assassins before, but it was long ago enough I couldn’t really remember what happened or whether it was any good.

I have just realised that paragraph is completely unnecessary. Anyway.

A team of assassins (13, surprisingly) is assembled to kill a Lord who is not the Messiah, he's a very naughty boy. The plot is not much more complex than that. There are so many assassins I genuinely lost track of the names, but it’s irrelevant. There’s the chubby funny one, the serious one, the young one… You get the picture.

The main character you’ll remember is Lord Naritsugu Matsudaira, an utter bastard, murdering and raping so nonchalantly it’s practically pantomime. One dimensional and unsubtle, yes; but again, it’s irrelevant. 13 Assassins is not about character depth. This is a two and a half hour film which flies by as paid killers assemble and the action ploughs through bloodier and bloodier show downs; the warfare escalating as the final confrontation approaches.

Director Takashi Miike (Audition, Ichi the Killer) is prolific, with over 100 credits in the role since 1991- although there is a certain “hit and miss” element to his work. Actually, that’s unfair, he tries different things, some work better than others but that should be encouraged. One thing Miike does like to include in his films is violence, and he’s a master of it.

Bedsit it? Two and half hours of gristle and guts, a dizzying carnival of gore. I bought Miike’s latest samu-violence, Blade of the Immortal, once 13 Assassins credits rolled. I loved it. 8/10