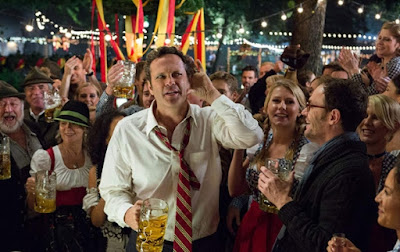 I love Vince Vaughan. There, I said it. He cracks me up, and can also be totally badass (Brawl in Cell Block 99). Women want to be with him, maybe. I want to be him, definitely maybe. Plus he’s tall, oh so tall.

Unfinished Business is not Daenerys Targaryen, it has no ambition to break the wheel. If anything, its sole ambition is to be the wheel, to be exactly what it is expected to be. I don’t have any problem with that, I am sometimes often tired and lazy. I more frequently have no desire to use my brain than to use it. I had no desire to use my brain during Unfinished Business, more importantly I had no expectation to have to, and do you know what, it ticked the box. I was tickled for an hour and a half, which was good as that's how long the film lasts.

That is only half flippant- I am fed up with two hour comedies which lose the gags as they tie up the story for half an hour at the end. Concise is nice!

Vaughan’s ambitious but unlucky businessman Dan, his ageing, sex obsessed employee Timothy (Tom Wilkinson) and intern Mike (Dave Franco), who is a few sandwiches short of a picnic, chase around after a make or break business deal. Yes it’s cheesy, crude and unoriginal; but it’s delivered well and doesn’t pretend to be anything other than a rowdy road trip type film. Much like Bad Grandad or, erm, Road Trip.

Dave Franco and Tom WIlkinson are both on form and Vince Vaughan does his best Vince Vaughan, which admittedly is for some and not for others. Sienna Miller has about three minutes of screen time to be a rather one dimensional bitch, and manages it. Except that she’s so pretty I found it hard to hate her character, business rival to Dan, Chuck.

Ultimately Unfinished Business does exactly what it says on the tin.

Bedsit it? Look, it’s easy to find (Netflix), easy to watch and provided you go in fully aware of what it is, Unfinished Business should make most people at least chuckle. 6/10