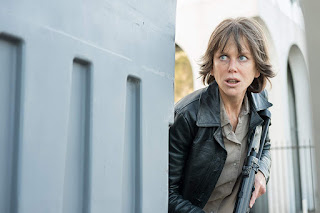 Nicole Kidman has been picking some interesting films of late- either that or she has a new, very persuasive agent. The Killing of a Sacred Deer was, well, not exactly my favourite, but I thought she was good in it. The Beguiled will forever hold a special place in my heart for being so spectacularly boring and shit that I started this blog just so I could publicly slag the bejesus out of it online; like the faceless keyboard warrior I am.

KIdman, famously easy on the eye, has come in for a lot of kudos for looking not as easy on the eye as normal in Destroyer. In one sense fair enough, she’s a good actress and plays the character of Erin Bell, a burnt out undercover cop, very well. However.

In another sense, why the hell is that important? Nobody gives average looking actors credit for their conventionally underwhelming visage. “Oh, John C. Reilly was so good in it, it was so brave of him to look like that.” 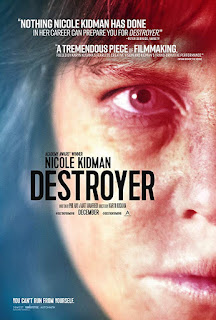 John C. Reilly always looks like that! I think Reilly and other character actors with enough talent to carry a film should get given the CGI or cosmetic treatment to look more beautiful. Steve Buscemi as a young Errol Flyn? Jack Black as Cristiano Ronaldo? Julianne Moore as... wait no I bloody love the beautiful Julianne Moore- she’s on the list. That list being actresses I cannot be within 500 feet of.

Back to Destroyer. It’s a slow burn, but Karyn Kusama’s (Girl Fight) film picks up as the action increasingly weaves into the story. It’s irrelevant but I was most pleased that Kidman holds her rifle left handed like me- Yay! There’s obviously something eating at Erin, her personal life and police work are tied tightly. She’s fraught, clearly loves a booze and has a daughter who’s both ashamed of her and acting out. It pulled me in, and while it isn’t the genre spectacular some critics labelled it, Destroyer is a solid film.

Bedsit it? Destroyer reminded me of Narc and Hell or High Water, it was nice to have a run down female cop for once and while it shouldn’t be a thing, a mainstream film with a female director. 7/10