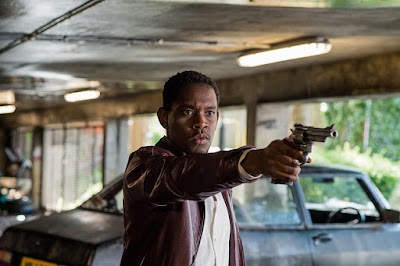 Before I watched Yardie, my sister told me she’d heard it was “gash”. I wanted to make that decision myself, I said, and put on the Idris Elba directorial debut. Based on a novel of the same name, Yardie follows D as he comes to London from Jamaica to get away from gang crime, only to immerse himself rather deeply in gang crime almost immediately.

Beginning in Jamaica, Yardie’s soundtrack is brilliant. That was my first thought. I also loved the Jamaican story following young D, it reminded me a bit of City of God. A really good start. But.

The film's milk went sour very quickly and not wanting to bail, it turns out I am exactly the kind of pussy to drink it. Yardie is all beef, no beauty, as characters I didn’t care about fell out and killed each other over things I lost track of because I was bored. Drugs, mostly. There was a fairly dull love story subplot, presumably to add some semblance of character depth. This failed.

It is never a good sign when you’re watching a “serious” film thinking “American Reunion is on Netflix”.

Ill Manors was above average, and also a directorial debut (Ben Drew AKA Plan B). Yardie wishes it was Ill Manors. Yardie isn’t even as good as Bullet Boy and looks up at Rollin' with the Nines in awe. For a film with so much violence- even the action doesn't save it. The Bill has better shoot outs. I was toying with turning it off, but instead I put my brain into sleep mode and surfed through it on a wave of indifference. Actually, indifference is probably a bit kind. It’s gash.

Looking for positives (which I rarely do)

- Colouring, reds, yellows and greens, out of nowhere! What made them pick those colours? Still looked good, even if unsubtle.

- Erm, I’ll never have to watch it again?

- My washing is nearly dry and I’ll be able to wear my favourite jeans soon.

- Tomorrow is a new day.

Bedsit it? Decide for yourself. I’m only here to give advice. Fairly strong advice in Yardie’s case. 3/10. I was very disappointed.

*More entertaining by many, many dick jokes. The Cinema loves a dick gag. A dick joke, too.