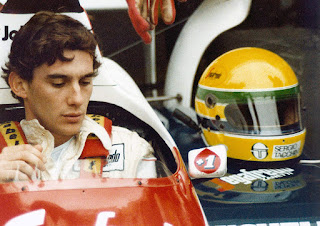 My usual rule is that I don’t like to watch a story where I know the ending, but as anyone who has ever met me will tell you- I am not always right. Senna was strongly recommended to me by a friend. It doesn’t matter that you know the outcome, he said. He also said it doesn’t matter that I hate Formula One almost as much as I dislike the fact that my balding will at some point take over and I’ll never get laid again. At least that’s how I see it, because the mental patient stuff will all be overlooked by the ladies provided I have hair*.

Formula One, the only sport in the world made even more boring by going to see it live. Watching thirty cars (don’t correct me- I don’t watch it and neither do I care how wrong I am) race past imperceptibly with the speed and noise of a chorus of Concords. I’m not a fan even on the telly, though I do appreciate the skill and bravery of the drivers.

Sometime, at some point, I read a report on the mental make-up of different sportsmen and racing drivers are about as close as you can get to psychopathic without ripping bunnies apart and keeping dead kids in your boot. Although some of that might be because of the lack of space in an F1 car.

Ayrton Senna seemed to be a fairly nice guy, with a sense of humour and the whole of Brazil behind him. A loveable hero, unlike Lewis Hamilton who has all the charm of a genital rash. At the same time he was a risk taker, with not only disregard for his life but for other drivers' - he assumed they all took the same risk, the same chance, the same dangers as he did, with as little care for their safety. To an extent he was right.

The man was an aggressive racer. A force of nature enhanced by technology and at times succeeding in spite of it; but the two combined to his own cost. Despite that it’s hard not to cheer for him as he achieved things even other F1 drivers could only dream of.

Director Asif Kapadia (Amy) brilliantly weaves suspense and humanity into Senna. By virtue of not having to watch the whole, tiresome race just the good and exciting parts of many, F1 even comes across as quite an exciting sport. Ayrton’s God bothering throughout the film is mildly annoying to me, but that’s personal and if God gave him all that, then he took it all away rather fucking publicly too. Still, if Senna doesn’t grab you and drag you round its circuit at 7000 miles an hour with the cars, there’s something wrong with you.

Bedsit it? I'm a fan of boxing, a sport with a fair amount of participants rendered brutally unconscious. In Senna, even with the helmets on, you know a worrying head loll when you see one. It's terrifying. Senna transcends simply just being for racing fans, it is a brilliant, exciting, devastating documentary. 9/10

*I'm also hoping to grow taller by a foot. Gotta have goals.