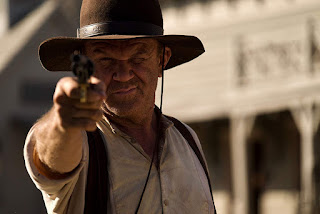 Jacques Audiard is an exceptional film-maker. If you haven't seen A Prophet, Rust and Bone or Dheepan, they are well worth your time. His films always have strong themes of family and belonging, and The Sisters Brothers is no different. Audiard's first English language film, this has a more humorous tone than much of his other work. I am a fan of Audiard to the point where each of his films is now an event for me, something I can't wait to watch.

With a first rate cast, including John C. Reilly, Joaquin Phoenix, Jake Gyllenhaal (who personally I'm not a huge fan of) and Riz Ahmed, The Sisters Brothers was, like Audiard's other films, one I was very excited for. Of these John C. Reilly (who also has a producer credit) performs most prominently. Ahmed and Phoenix are good, and Gyllenhaal tries desperately not to be insipid- with some success.

The film looks the part, while Audiard's take on the wild west is nothing new, it is well constructed. How it looks is not The Sisters Brothers ' issue. The familiar Audiard themes are present, and I expected to see those repeated. That's fine. Where The Sisters Brothers lets itself down is by trying to do everything, but not really doing any of it properly.

The Sisters Brothers isn't an adventure. in an adventure there's an element of mystery, of wonder, either for the viewer or the characters. The film lacks this, as he viewer lolls along the journey slowly with the characters. It isn't funny either, boasting only brevity of levity, insufficient to claim comedy status. When it finally gets to the action, what little there is did not placate me. Sadly, this is a run of the mill western. Maybe I'm old and jaded.

The IMDb ratings breakdown would suggest that along with the rest of the world, I am.

A quick look at the website's rating breakdown shows that sub eighteen year olds rated The Sisters Brothers higher than any other age groups. I have to say that surprised me; maybe the kids were just overjoyed the cinemas let them in to see a grown up film. Or too busy sexting the person next to them to watch it properly.

Overall, The Sisters Brothers lacks the required prowess in the vital areas- those being the ones to properly entertain, to save it. A huge let down if you know the usual high standard of Audiard's film making.

The Cinematic Sommelier: If you like a moderately dull western, the Cohen Brother's True Grit is exactly right for you. If you'd like something a little more unique, Netflix has both Tarantino's The Hateful Eight, which is long but excellent, and Ti West's In A Valley of violence, which is off beat but worth seeing.

Bedsit it? I really did not care about The Sisters Brothers' characters by the end, in fact, ever, really. The film will work for some, but not for me. A very disappointing 5/10.
Labels: Adam Thorn Adventure Bedsit Cinema Comedy Jake Gyllenhaal Jaques Audiard Joaquin Phoenix John C. Reilly New Release Review Riz Ahmed Spoiler free The Sisters Brothers Western