Only the Dead (2015)
Documentary
Rated: 18
Available on Netflix only
*Spoiler Free*

Amazon doesn't stock Only the Dead. Amazon, who sell everything. That tells you a lot about how controversial this war documentary is. Made by Time journalist Michael Ware – director/ reporter for this and Bill Guttentag – director, the film follows Ware as he somehow manages to access both sides of the Iraq war, befriending insurgents and US military alike. It makes for a daunting and dangerous task; with a lot of content which will shock.

I first saw Only the Dead after having to seek down a copy like it was a video nasty, so unabashed is its approach to the horror of war. That it has ended up on the ubiquitous Netflix is nothing short of astonishing.

Only the Dead immediately differentiates between the Mujahideen and the insurgents, which is an important distinction to make. The former being volatile, religious lunatics lead by Abu Musab Al-Zarqawi- hell bent on inflicting their brand of misery on all and sundry. The latter being everyday Iraqis who aren't fans of the US wading in to their country and blowing half of it away indiscriminately under the pretence of a “war on terror”.

Ware's film is not for the feint of heart, even if you're somewhat desensitised to violence. In the West we aren't attuned to this level of intimacy with the victims of war. Only the Dead displays the horrific effects of bullets, bombs and bigotry with a deliberately candid openness that will be unpalatable to many. 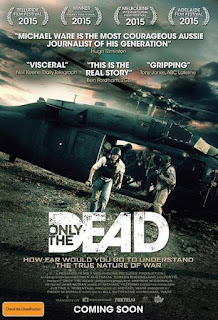 There's a journalistic moral conflict in Ware's film, beyond simply the explicit visuals, which he wrestles with. Is it wrong that he straddles both sides? He confesses guilt going with an insurgent attack on an American base, but really, they're fighting an occupying force. He again risks his neck with the Marines, storming a house with them which results in close quarters combat. Regardless of the ethics, it is a tense and yes, exciting watch.

Ware and team's ability to convince the combatants of their desire to reflect the war with accuracy and intimacy makes Only the Dead a very unique piece of work, and one which really does what its title suggests- lament the loss of life to those fighting or unlucky enough to be around it. Those who have seen the end of war. With dark humour oozing from the fighters, most likely defence mechanisms of their day to day existence, the viewer is left in the epicentre of the chaos.

Only the Dead is brutally compelling viewing, daring journalism and just a little bit controversial.

The Cinematic Sommelier: There are not many films much like Only the Dead. 2010 doc Restrepo is excellent, but only covers the US side of things. Netflix also has Ken Burns' The Vietnam War, which at ten- two hour episodes is not a quick watch, but is even handed and exceptionally moving. Away from the screen, on the page try Bao Ninh's The Sorrow of War and Jim Frederick's Black Hearts.

Bedsit it? That Netflix hosts Only the Dead makes it very accessible, which is good when clearly its subject matter and content has put suppliers off. Ignore the censorship, here is a film which really tries to understand and explain the complexity and horror of conflict. Ware and Guttentag also confront the ethics of journalism in their technique, making a film which if it doesn't repel you, will nonetheless stay with you for days. 8/10
Labels: Adam Thorn Battle Bedsit Cinema Bill Guttentag Death Documentary Gore Insurgents Iraq Michael Ware Mujahideen Netflix Only the Dead Review Spoiler free US Marines War