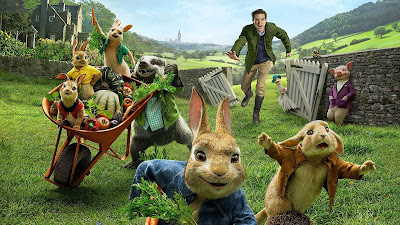 I'd have watched Peter Rabbit with the niece and nephew, but children don't appreciate films. Even children's films. I had been assured this was funny, though still put it on with some trepidation. Directed by Will Gluck, who helmed the widely derided Annie, and starring the wide and derided James Corden. In short, this cutesy kid's film, based on Beatrix Potter's bizarrely adored original stories, did not appeal.

These days I have literally no idea what the Beatrix Potter stories were like. I did read them, but I was a child a long time ago and had to create room in my brain for boxing stats, philosophy, horror films and the competitive prices of local off licences. My mother assured me Peter Rabbit is nothing like the books. This is a good thing unless you're stuck in the Victorian era, because a google image search revealed it being rather twee.

The MacGuffin here is the vegetables in the garden next to Peter and his relatives' warren. The animals lust after these fine country cabbages as if it was 100% Colombian pure. However the unreasonable old man who has spent months cultivating this fine produce takes unkindly to bunnies burgling his batch. We're supposed to side with the rabbits of course, but I couldn't help thinking that maybe if the rabbits in Watership Down had been filthy thieves we wouldn't have felt so sorry for them.

As it is, though, Peter is quite charming and very amusing. Once the old geezer next door croaks (early on- no spoiler), it goes a bit Animal Farm. If in Animal Farm they had a big raucous farmyard party and all got off their tits on celery and radishes. Which they might, I've never read the book. My mate showed me the film once but I think it only shared the title. I hope he's destroyed that DVD.

The plot then involves Domnhall Gleeson's uptight relative of the country cadaver taking over his patch and entering into war with the wabbits. All while trying to bonk Rose Byrne who lives next door.

Here's the thing, Peter Rabbit is nothing like the books, and it is so much better for it. I laughed heartily throughout. Milk came out of my nose. I wasn't even drinking milk. The film is endearingly self aware, adding a layer for the adults and allowing it to have its cake and eat it too. The human versus rabbits fight scenes are very funny, with some excellent slapstick.

Peter Rabbit skips along at a jolly old pace. Oh Jesus Christ, “jolly”? I'm old. The an-imal-imation is very good, retaining a cartoony aesthetic which fits the feel of the story.

When I was a kid we had the aforementioned Watership Down (traumatising), Return to Oz (like a horrifying bad trip) and The Dark Crystal (Jim Henson's dastardly mission to permanently scar every child in the world before he croaked). Without those beacons of joy I wouldn't be the well rounded, happy man I am today. Is this joyful, cheery, playful, (mostly) death-free, adventure filled caper better for children's collective psyche? Almost certainly, yes.

Peter Rabbit is a genuinely funny film whether you're a child or not. A sequel is being made.

The Cinematic Sommelier: I'm trying to think of the last time I laughed like that through a kid's film. Minions was funny, Home Alone (I prefer the second one- but up to you) shares the slapstick. For a bold British body, with orange notes and a soupçon of deepest darkest Peru, try the Paddington film(s).