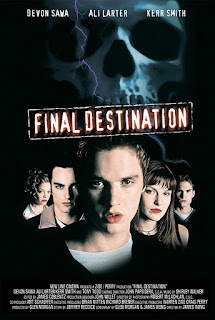 Now, high culture they ain't, but the Final Destination series has brought me much joy over the last (gulp) almost twenty years. I remember renting the first film on VHS from the off licence round the corner as a sixteen year old. I liked them because they didn't ID for anything, ever. The films are known for their opening “set up” disaster, and subsequent avoiding thereof by a small group of friends, and a few strangers or outcasts thrown in as cannon fodder, before the inevitable gruesome demise of 95% of the cast.

The next to no nonsense set up, with lots of pre-mortem foreplay and innovate gore appeals to me. Particularly the gore. I wish it was my job to invent creative ways to kill people. In films only, obviously. Although there are maybe one or two people I'd make an exception for. The first Final Destination was incredibly original and while not all of the sequels built afresh on that USP, some of them did do so rather well in my opinion, particularly when 3D was spliced into the macabre theatrics. Here is my ranking of the Final Destination series from fifth to first!

As a little Bedsit Bonus I've thrown in my three favourite deaths from the five films at the bottom. Do let me know your top ones!

Tried playing the “choose their destiny” option on the DVD, just to spice the film up a bit because it seemed novel. Here's what I learned: never play the “choose their destiny” option. What a load of shit. Also, despite having its moments (topless sunbed deaths- hot!) Final Destination 3 is is the weakest in the series for me. Although there's not much in the back three, ya'll know how much I love 3D and...

The only entry in the series I saw in the cinema (on a date, the poor girl), I saw The Final Destination in 3D on a huge screen and boy did I love it. You ever seen a man forced through a fence like Play-Dough, in 3D? Well, yes you have if you saw this at the cinema, but the point remains- I loved it. Hampered slightly by a weird ending.

On a rewatch, as I do like to do my “research”, I realised I had forgotten how small scale and intimate some of the deaths are in the first instalment. While I quite like that, I prefer watching suspension bridges destroyed and people being squashed by giant falling plates of glass, so...

Probably my most watched of the five films, many a night my mate and I spent slow motioning the kills on the mystical wizardry that was the then new DVD format. Crystal clear, then, looks like a third rate stream, filmed on a phone in a busy cinema now. 4K has decimated the DVD. Brief digression, I do like that image quality improves as my eyesight declines. Provided they continue at the same rate, I'll forever see things in standard definition. Final Destination has a few CGI issues now, but they really put thought into the spectacle of the kill, and that's why I'm watching the series. It certainly isn't for the acting.

THREE DEE! Splats! Burns! Blood! Bridges and that gym scene! Eye popping, bone crunching balls out, everything including the kitchen sink madness. Complete insanity, of course, but so much fun in three dimensions with the best graphics of the series. There's no plot to speak of really, it may as well be Faces of Death for the Playstation generation, just grisly demise to grisly demise. Excellent fun, if that's your bag. Final Destination 5, emphatically, is my bag.

And here, in no particular order, are my favourite three deaths from the five films.