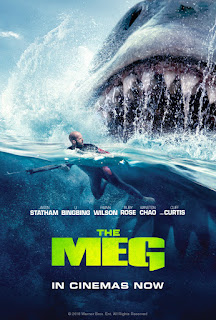 Tagline: “The ultimate lady killer” Sounds like a Peter Sutcliffe wet dream. Something for everyone this film. Just a shame Meg isn't a hammerhead I suppose.

Premise: The Meg involves a sixty foot, prehistoric shark stalking current day shorelines and Jason Statham playing a highly skilled submariner. Guess which is more believable. However: guess how much fun I had.

While a massive fan of Steve Alten's highly addictive original novel series, I was under no illusions that The Meg was not going to be the book I loved made verbatim in to a film. If it had been Eli Roth would still have been in charge. However, money is as money does. Whatever that means. A joint finance with the Chinese (second biggest cinematic market in the world, sorry Nollywood) meant that the studios, makers and powers which be went the other way with the source material; which is also fine. Provided they delivered. I was no less utterly involved in the end product and went to see the “watered down” Meg with a mate hoping for entertainment.

Anyone who sees the trailer knows The Meg won't be at the darker end of the spectrum. It is a lot of money to spend animating a giant shark and they had to pick one of two markets. Gory or glory. The makers picked the easier market to score a hit with. The one Jaws scored a hit with. While The Meg (I hate using the “The” like the rest of you) does aim towards children, come on now, so do most big budget films. I, as an avid fan and reader of the whole series, both have gripes and props. Gripes first.

Jason Statham is horribly miscast as Jonas Taylor. Someone able to function as a hero, which he does well, but just not with a coherent accent or any credibility as an intellect which Jonas is supposed to be. Directors: just get him to be south east London from the first take, save your editor the heartache. Two weeks into The Meg's shoot someone clearly convinced John Turteltaub to call quits on Stath's attempt at any accent other than Lewisham. As my mate said, "There's a reason he didn't talk in his best role" (Mean Machine). Many of the rest of the cast are pleasingly on song. Bingbing Li, Rainn Wilson and in a surely deliberate nod to Deep Blue Sea, Page Kennedy all sell the story well. As do the graphics.

Most of what Meg aims to do, it does very well. Firstly, it entertains. The main, most important tick in my eyes. There are moments of CGI which imply threat with such subtlety I was reminded of the Norwegian film Kon-Tiki. The menace beneath the waves. Of course The Meg also displays the full giant-shark exhibitions one might attend the film for. The humour is on point, too. It could have done with more gore, but what 12A film couldn't? There are some wonderful scenes, there are some hokey scenes and at my estimation three of the Meg novel series crammed into one film.

Bedsit it? If you like to see a giant shark eating shit, and by shit I mean people not all the plastic we've polluted the ocean with, then 100% this is the film for you. Wouldn't that have been a good ending though? Meg just chokes on cotton buds we've flushed into the waters. Sure, anti-climax but wow. Poignant.

Meg is fantastic fun, both myself and my- I promise you totally real- friend had a blast and I personally hope for a slightly more gory sequel, just because I'm like that. 7/10