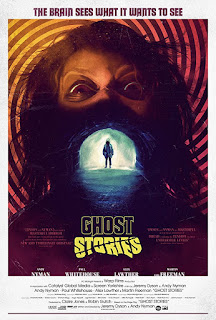 Tagline: “The brain sees what it wants to see.” The brain is a wonderful, powerful, flawed tool. It'll make you believe ghosts are real, that you're in love or that we're not all doomed. Anything, really. All brain- lies.

Even I can diagnose that. And sell you a wig.

Ghost Stories is meticulously crafted, as you might expect from something transferring from the stage to the screen. It may not sound funny. But it is. No less could be expected from a dastardly combination of Andy Nyman and some of the League of Gentlemen; it works because of the set up and construct. It is much like the book Dead Funny, or Roald Dahl's Ghost Stories, Unsurprising given some of the people with a hand in the play and film wrote for the Dead Funny book. Worth checking out, by the way.

I couldn't decide if Ghost Stories was trying to outright scare me or simply take me out of my comfort zone. It definitely did the latter, though. I was twitchy although coming off the meds has made me that anyway... Comedy and its intrinsic link to death is a card powerfully played. We joke when we're afraid. There's also an almost innate titillation about the ghost stories within Ghost Stories, a deep desire to solve the mystery of what's going on. That's what kept me entranced. I never mention how much I value a mystery in a ghost film, but I really do.

The third act is a bit bonkers. But, it is so well acted, written and wonderfully crafted that the roller-coaster ride keeps you clinging onto it. White knuckle style. If you like this sort of film - It is hard not to fall in love with Ghost Stories. Nyman (as ever), Freeman, Whitehouse and particularly of note Alex Lawther sell the haunted, twisted, very British sense of horror. It has some surprising brutality, too, clever twists on the horror industry boring standard of "jump scares".

Bedsit it? Ghost Stories takes you and places you in its world, very believably. Incredibly so, on reflection. It is also as creepy as an unexpected spider in your underwear at night. Don't ask me when there is an expected spider. People like weird things, I'm not here to judge. 8/10 which may well go up with repeat viewings.