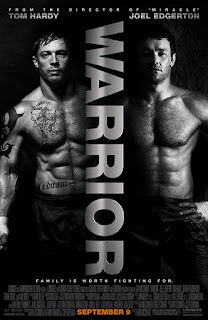 By way of celebrating our now 100 reviews (note: not posts. 100 posts was celebrated here) I thought I'd dig around in my Bedsit Cinema folder, which believe it or not has about 200 reviews, some of which I completed and posted, and others which for one reason or another I did not. One or two (twelve or so) of these, I realised, might be quite interesting to cobble together, rather than somehow muster the energy to individually complete as a review.

They're not finished, which is obvious, but I've added scores. Some of these films I loved, some less so. Some I didn't complete because I couldn't find enough to pick out, others because I had too many similar reviews at that time. I'm not cruel enough (yet, still working on it) to inflict my B grade writing on you in a lazy effort. This is more like a whirlwind rundown of the ones I enjoyed. The ones I didn't, and the just plain crazy will follow.

Please, then, feast your eyes on the Bedsit Cinema Cutting Room Floor: The Good!

A film so good I could stomach MMA throughout it, which normally I hate.

Everybody loves Tom Hardy. All moist in the knickers about broody Tom, dishy Tom, oh he's so deep, Tom Tom Tom Broody Bloody Hardy. However, I do like him too. Consider me a fan, sure, if not quite dribbling at the crotch about him like others.

Has a much more “filmic” quality than I remember, earthy, grainy and it works. Even though that wanky word in the past would irk my soul- used in every advert production pitch as a by word for “look like Hollywood, but without the cost.”

The fight scenes are very believable and thrilling.

Nick Nolte is great as the alcoholic father come trainer.

Probably the biggest compliment I can pay Warrior is that it is, for me, as good as Rocky.

They bypass the obligatrory training montage (even Rocky had a montage! A montage!) by having several fights apiece for two different fighters. It sounds like the tactics of a sequel; bigger, badder, dumber, but it really works.

Engaging, believable and drags you in. 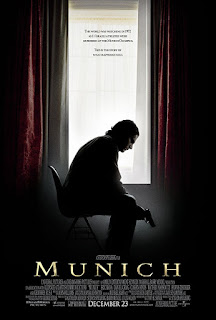 Asks how far people will go for revenge, both as a collective, and then as individuals within that.

The events of the Munich Olympics are enough to make anyone upset. Where do you go, though?

Regardless of its obvious bias, but then who wouldn't be biased in favour of those victims, hard, brave people who fought their demise and murderers at every turn. Munich is still a very interesting take on a huge moment for the Jewish faith, sport and the world.

I'm going to ignore all political and geographical issues, and focus on the human issues and ethics.

I like the juxtaposition of the victims with the culprits, also the delicate exposition.

If you don't know about what happened, see One Day in September, it is brilliant.

Judaism is a maternal society/ faith, which I like and Munich shows that nicely. I'd let (I have let) the women in my life govern me more than the men. They usually know best, or at very least follow up on their plans.

The way Spielberg makes it look like they are all under surveillance from the start works well to create a larger sense of conspiracy.

Munich is both a spy thriller and moral dilemma.

If you're a soldier, you signed up for killing, and I don't think you have any right then complaining about it, however right I might think you are. Dumb (brave, whichever) enough to sign up? Take the consequences dickhead. Civvies, they have a right to moan when shot at. The army are a pawn. Whatever rank or however good at killing or obeying orders you may be. Never above a pawn. Those of us not choosing to enter the game of death exist because we choose not to play. I have no issue with killing within war, it's war, people die; and largely by their choosing. 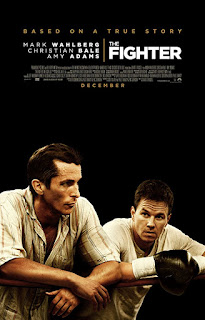 Tagline: “Every dream deserves a fighting chance” Pass the bucket. If I'd read this before seeing The Fighter of knowing anything about it, I'd have assumed it was a musical.

Delivery: A lot of what The Fighter delivers, it delivers brilliantly. However, for a boxing film to not have convincing fight scenes is unforgivable. I watch a lot of boxing, it is [one of] my job(s), and The Fighter's fight scenes suck. I know Ward wasn't exactly fleet of foot but they're pedestrian and awkward and in no way convincing. However, the film is about more than fight scenes, in the ring, at least. The Fighter is as much about hierarchy and love, and that hierarchy within love. Where does it stop and when does it stop bothering you.

Boxing is a business, captures that.

Also portrays the gamut of emotions at boxing.

The drama is believable, palpably so. The humans interact like real humans. It's way better than any of the fight scenes.

Tells the honest truth of drugs, they're delicious. You think millions of people with nothing left to gamble go for broke on a handful of highs at the risk of being six feet under? People take this risk because what they think they are gambling on is an escape/ fun.

At what point do you forgive someone and on whose terms?

Another film which isn't as good as the general consensus, but isn't bad, either. 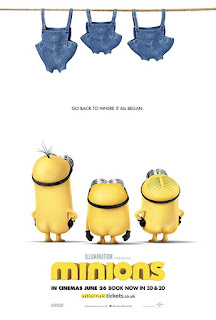 I feel like I'd be in a position to review Frozen after it played on repeat on Christmas day while my niece and nephew, who had asked for it on, ignored it, but out of necessity my brain switched it off.

Minions is genuinely very, very funny. At least I thought so.

Not aimed at me, but I could quite happily sit and watch it again, like all good children's cinema, adults can enjoy it too. 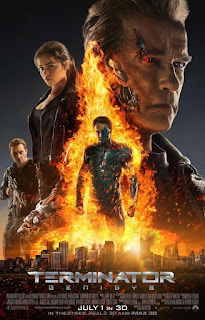 Tagline: “The Rules Have Been Reset.” Yeah because you cocked up several sequels. Clarts.

Delivery: Full disclosure, I rather liked Terminator Salvation, not least for Christian Bale's epic meltdown on set, and then Family Guy's brilliant take on it.

It's CGI mayhem, but is it entertaining?

The credits at the start are still going 11 minutes in, which seems quite a long time.

Genisys is big, bloodless and dumb, but not really aiming to be much more.

There are admittedly some “oh fuck yes” scenes, genuinely great moments of action, particularly for fans of the series.

The makers also get away with a decent level of violence (certainly on the Blu Ray which is a 12) because it's not humans being brutalised. Much like how Itchy and Scratchy get away with bloody carnage on The Simpsons, but with Arnie and a Barrett .50 calibre sniper rifle.

In the end I didn't hate Terminator Genisys, in fact I sat through it moderately entertained. If a bit upset it wasn't more generous with the blood letting