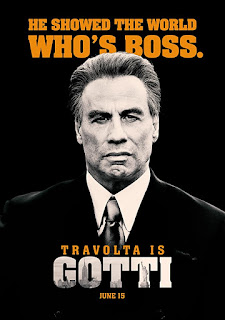 Tagline: “He Showed the World Who's Boss” Did he though? This stinks of hyperbole and worrying adulation of Gotti: a portent of doom?

Premise: Years in the making biopic of the “Teflon Don” John Gotti, a man even Tony Soprano was in awe of. Although Tony Soprano was fictional, so they could have made him in awe of Ian Wright if they'd wanted to. Or an alien abduction believer. Or gay. Or not Tony Soprano. The list is endless for the fictional things writers can create. Mad in't it, you just can't make this stuff up.

Delivery: I started to read a Gotti biography some years back, but it was so nauseatingly in love with the prick I couldn't stomach it. I'm all for some violence, grim and gory as it comes, but there is a tact to handling it. Violence can really only be enjoyed when it is fake, or when it is against a genuine baddy (Nazis). This film asks you to sign up to #TeamGotti and I'm not sure I'm down with that. There is a subtle distinction between violence as entertainment, a la Gladiator, and violence by way of warning, of brutally laying down the reality and consequence, a la City of Life and Death. The camera in Gotti wanders, almost unsure whether to titillate with or just outright wallow in the ferocity the film-makers are so clearly enamoured with.

Gotti is one of the most critically panned films ever. Well, as you may or may not have noticed, Bedsit Cinema ain't the freaking Guardian. John Travolta plays the titular mobster, for me a must miss actor since Grease first made me sick in my mouth (alright, alright I'll give you Pulp Fiction). However, Travolta does convincingly portray a gangster here. Whether that is Gotti or notti I don't-a know! Eh! Whatsamatter you? Why you lookasosad? Ok I'll stop. Travs does resemble Gotti closely, too. And that, ladies and gentlemen, is the sum total of nice things I have to say about Gotti.

The ageing make up is bad, as well as inconsistent. Weirdly, JT is quite easy to make into a convincing younger version of himself, mainly I presume because plastic doesn't really age, so all they had to do is dye his hair. The film covers forty years or so, and while Travs has the full attention of the age make up team, which I assume was one blind man with some silly putty and hair dye, nobody else involved in making the film gave a single fuck about consistency (both age wise, and all other areas of the film making process). At one point Gotti's eternally 30 year old son bumps into a friend at a party and doesn't recognise her.

She's a forty year old teenager, I'd be fucking confused seeing her too.

In summary, Gotti's biggest crimes are that it is derivative, but of what exact film/ influence it does not know. It starts reasonably well, but wanders inattentively into no man's land, and ends with all the gusto of George Michael's last fart. A reviewer on IMDb claimed they spent most of the film wanting to rewatch the Sopranos, I totally understand that. Gotti is bad. But it's not as bad as people like to make out, and to finish on a positive, even if I'm just repeating the only one I have, John Travolta isn't terrible.

Bedsit it? Err, this is weird because I actually made it though the film, at home where I'm more inclined to abscond from a narrative if it jars me. Full disclosure, I'd had some wine and was making pasta. No, avoid, unless like me you have a self imposed reason to. 4/10