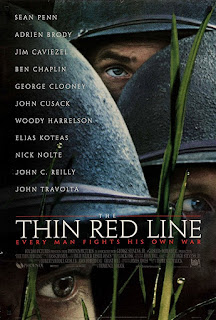 Tagline: “Every man fights his own war.” Both literal and metaphorical, though also both contrived and contrite. I fall on the side of it working because of the scale and range of the film.

Premise: How the fuck did I only just learn, twenty years after first seeing The Thin Red Line, that it is based on a book? Don't answer, “because you're a tool”, I know that already. The Thin Red Line is a war epic (classical, not zeitgeist use) with poetic and philosophical leanings.

Delivery: “I was afraid to touch the death in her. Didn't see nothing beautiful about her going back to god. People talk about immortality, but I didn't see it.”

I first watched The Thin Red Line in the wake of having seen Saving Private Ryan at the cinema as a fourteen year old. How my parents bargained us in I don't know, I barely look 14 two decades later. I don't recall being a film person before SPR, but afterwards my interest became all consuming and although I didn't hate it first time (a rental from Purley Blockbuster on VHS – RIP) The Thin Red Line didn't forcibly bend me over and thrust war violently into my eyes like Saving Private Ryan did, which was, at the time, what I wanted. Yes, my eyes you creep, it's a film, the hell is wrong with you?*

As years pass, I have come to realise that The Thin Red Line is a paradoxically beautiful and realistic war film. It is a cinematic dichotomy, The Thin Red Line, at its core. A poetic, loving film about humankind's difficult and violent relationship with our environment and fellow man. It is moving and in parts complex. Like war it sprawls and features many characters. It may have one of the best (all male) casts ever.

What I like particularly about Thin Red Line though is the contemplative, confused, caring and neutral nature it manages. The violence, while not absent, is subjugated by a human approach, focusing on the emotions of the afflicted, both American and Japanese. It is all very affecting, both in its beauty and its misery. The Thin Red Line is as believable a portrait of war as Saving Private Ryan, but simultaneously totally different in style and ethos.

The ebb and flow of characters and names one might expect to last speaks perfectly to the film's philosophy. A word I use deliberately. Malick definitely speaks through his films in both a visual and entertaining way, as well as a personal one. I haven't watched any of his newer films, apart from The New World, because The Thin Red Line is so good, and I've heard such bad things about them. I don't want to besmirch the demi god he is to me for making The Thin Red Line. As I get older, the more I watch it, the more I see in it. A perfect construction of dialogue, acting, imagery, meaning and music. The music, oh the music. Beautiful, overwhelming, crippling, apt.

Bedsit it? Yes, a hundred time yes. The Thin Red Line is almost the war film for both fans of the genre, and those not. It is both a beautiful, serene composite, and damning indictment. It is nuanced off its tits, banging lines of subtlety off the back of brutal, whilst giving poetic a generous reacharound**. 10/10

*The only film able to literally bend you over and fuck your every orifice, ounce of your soul and leave you feeling ashamed and more dead inside, is of course, La La Land.

**Not long been single and already the sexual imagery is at top shelf levels.