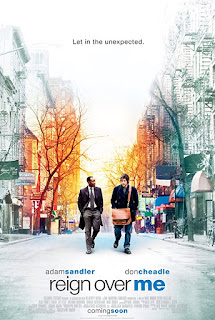 Tagline: “Let in the unexpected." We all want me to make that joke here. You know we do.

Premise: Adam Sandler plays Charlie Fineman, a man mentally adrift in a lifeboat as the stormy seas of reality rage around him. Old uni friend Alan Johnson (Don Cheadle) happens upon him, and reaches out to help, not realising the depth and severity of the issues.

Delivery: I was at a funeral yesterday, which prompted me to think. Yes, before you ask, it hurt. To think about guys and our relationships, Reign Over Me is the perfect film for that mood, it appears.

I'd seen Reign Over Me twice before, and my memory of it was that despite having Adam Sandler in, it's pretty good. Which is a bit unfair of me. Don Cheadle is a very versatile actor. Adam Sandler is a capable actor, but cast with some voodoo alchemy in this role. The part suits him perfectly. Sandler, who to so many embodies their childhood, naivety and a certain joy in that state, plays a man reduced to infancy through the most awful adult loss and pain. It's powerful, and he portrays Charlie Fineman with a straight bat; no fucking around. That's not to say that Reign Over Me is without its funny moments, far from it. But it is over-ridingly a drama about the loss of youth and male friendship.

Reign Over Me focuses on one man who has lost touch with his past, and one man who has lost touch with his present. It's about men, essentially. Every friendship I have is not the same as it was five, ten years ago. A lot of that is down to me; I change jobs, move house, suffer crippling periods of depression. But I'm also just less and less bothered about other people, and I think most blokes go though something similar. Yes I'd like to see my mates all the time, but things change. It is always good to see those constants and to Alan, Charlie was a constant, but when they happen upon one another he's very much presented with a different person than he remembers.

What the film captures so well is how men connect without connecting, we give off signals, never stating the source. Men tell stories to explain their emotions, because explaining our emotions is too hard, either verbally or mentally. Largely, and there are exceptions, we just give the impression things aren't great, and hope someone is in tune enough to pick up on it. They often aren't, not their fault, but suicide is still the biggest killer of men under 45. Charlie isn't obviously a suicide risk, but neither is he living a life which is in any way a reality. 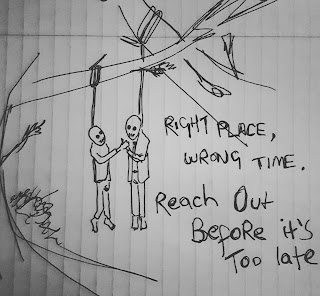 If the strong, silent type was ever perfectly portrayed, it isn't Eastwood, it's Charlie Fineman in Reign Over Me. He never says a word about his problems as they consume him from his core outward. He is a dramatic representation, a perfect piece of persona and a damning warning. Blokes, take note, there are a few ways out of the watery grave, and flailing around like a drunk who's slipped in his own sick, is both metaphorically and literally a bad idea. Reach out and ask for a hand to grab. Even if that hand of friendship is one which hurts you, which initially makes you feel weak, accept that. Move past it. See the love in that hand (I promise this isn't a drawn out wanking metaphor). I mean this. The most unexpected, obscure people have helped me, and I'm sure you will find the same.

Bedsit it? Reign Over Me is heartbreaking, funny and true. Brilliant. 9/10