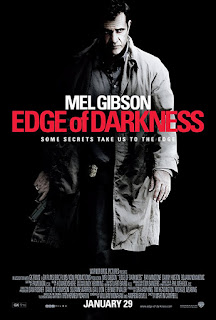 Tagline: “Some secrets take us to the edge.” Sharting will do that. You try an edgy, fast paced walk home with baggy, wet pants: no way you're telling people. That shit stays secret. I'd imagine.

Premise: Realistic action-thriller based on a BBC show from the eighties. A detective tries to solve the murder of his activist daughter. Corruption, subterfuge and daddy('s) issues abound.

Delivery: From its shocking, brutal, opening, Edge of Darkness is engrossing. Grimly believable, with action and intrigue locking horns in a most pleasing way for the viewer, and it doesn't let up until the brutal conclusion. This is a conspiracy thriller, where the truth is both an abstract concept and a relatable, tangible thing. It's also the bulk of this blog, contemplating that there concept, but you were warned! To begin, acting kudos; Gibson is brilliant, I know he's a cock but he is a good actor. Winstone is also excellent, his character ascribing to my philosophy of pill taking; wash them down with whisky. That'll cures ya!

However, the whole conspiracy in Edge of Darkness goes back to that element of mystery which I think works so well in ghost and murder mystery films. As the characters and viewer are dragged into asking the question why. Even when unpleasant layers peel away, we're forced by necessity to keep going until we hit truth. It led me to wonder what is the truth, how do you know? How far do you drill down? Is the truth wherever you stop asking questions about the truth? Is it where pain of reality overtakes your desire to hunt for it, to expose it?

They're hard questions, and I'm about to ask more so steel yourselves bastards. Once you think you found the truth, what do you then do? If it isn't nice, or palatable, even if it is dangerous; can you hide the truth, and to what cost? As Gibson's Craven meets fierce opposition from those not wanting him to know their truth, and has difficulty getting help from those too scared about opening that can of worms, I was thinking about how much we question things we don't want to know the answer to. It's a bit like when my dad asked me if I'd ever smoked weed, some questions you simply don't want to know the answer to, and I think there's a possibility we subconsciously don't ask some questions, not wanting to know.

Also, with asking questions you don't want the answer to, you're then putting the onus on someone else to lie to you. Morally, that's huge.

Fortunately, as Craven soldiers onward, deep in his search for the truth, plenty of violence goes on around him. Phew! Edge of Darkness is less of a thinker and more what Jack Reacher should have been, with added nuclear waste. A grim prequel to the Toxic Crusader. Troma this ain't, there's a deepness and soulful sadness to it all which while not exactly upbeat drives the story; and certainly got me invested in it deeply. The violence is palpable, flying off the screen, ruining your life the way it ruins the characters'. It is murder with consequence, done with realism, and I like that kind of violence. For two reasons*.

Bedsit it? End game, how do you play end game? With love, with hate? With apathy? I've seen all three. Trust me hate ends it all quicker, but is only on occasion the right call. Even on a fourth or fifth watch, Edge of Darkness is a great film. On rewatchability alone this is closing in on a 9, but for now 8/10