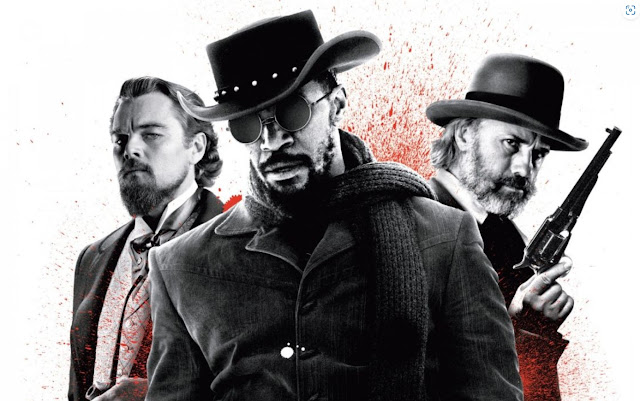 Tagline: “Life, Liberty and the Pursuit of Vengeance.” Probably an obscure reference to something.

Premise: A slave is relinquished of his indentured servitude, and flourishes in the company of a flowery Germanic man, who may or may not be what his prosaic, meandering assertions claim.

Delivery: “Joe Frazier is an Uncle Tom. He works for the enemy” (Muhammad Ali)

I'd been meaning to watch 12 Years A Slave a second time, but the Blu Ray has sat on my shelf, depressing me at the very thought. However, Django allowed some savage slavery revenge porn, and who can't get on board with that? I'll tell you who, racists, that's who. I'm a lifelong Tarantino fan, except for when he made CSI weird for a couple of episodes, plus I love a western. Thus Django Unchained was something I was looking forward to for ages when it came out. Initially I wasn't overwhelmed, but a second viewing proved more enjoyable, so I went back for a third.

At almost three hours, it's almost in need of an interval like Hateful Eight has. I thought I may just have one midway through, as it's on Netflix and this is my day off; y'know treat myself. But then Django grabbed me and didn't let go. Quentin really knows how to make an audience giddy, in a tingly with excitement, hugely violent, way. Django Unchained is a perfect storm of Tarantino's style, both of writing, visually and of his traditional use of contemporary, offbeat music; the hip hop and rap in Django is brutally appropriate.

It also has a wicked sense of humour, as, to be fair, do all Tarantino films. Django is knowingly, gloriously wry, witty and on occasion, plain funny. The humour contrasts with the severity of the subject matter, and acts as a perfect counterweight. The artistry both visual and written is exemplary. I'm in danger of crawling up QT's arse but it really is. All of his post Kill Bill (inc Kill Bill 2) films get better with each viewing.

Django is also great to look at, just beautifully shot. The violence quite literally pops off the screen in chunks, so visceral you can taste it, like the spray from a 9/11 jumper. The “Mandingo fighting” scene is excruciating too, more so even than my distastful jokes. Portrayed with subtle class by Jamie Foxx, the titilar hero is a complex creation; a freed man in every sense of the word, which is an excellent piece of characterisation, conversely shocking and believable. The cast are all superb, Christoph Waltz is such a talent, and short, too! Leonardo Di Caprio is rapturous, encapsulating and yet revolting at once. Like vomiting on your own orgasm.

However the stand out is Samuel L. Jackson, as Di Caprio's slippery, spiteful slave Stephen. He is truly an “uncle Tom”, to paraphrase boxing's both protagonist and antagonist, and is gobsmackingly brilliant in the complex role. Jackson deserved any accolades he got for this. The second half of the film is essentially a play. A tense play bathed in violence. Which I suppose could be argued of Reservoir Dogs, long portions of Inglorious Basterds and pretty much any Tarantino dialogue scene. That's just his style. Did he go too far with said style on Hateful Eight? Wait for my review, you ingrate.

Bedsit it? Yes, not everyone will take three viewings to warm to it like I did, but I was revelling in Django yesterday, really enjoying it. Also it being on Netflix makes it accessible. It has moved from a six, to an eight, to a 9/10