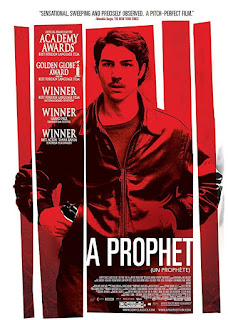 Tagline: “Escaping the prison of life.” A double entendre, how French!

Premise: A young Arabic man in a French prison battles prejudices while educated on life inside, and learns the other meaning of institutionalised.

Delivery: “Respect? Do I look Corsican?”

Un Prophète is a film with such subtlety of tongue that for those with little to no grasp of language, known worldwide as the English, it is hard to comprehend the complexities of the young Malik's experience and growth within his confines. A nineteen year old, who looks every year of his twenty seven year old portrayer, and an Arab in a French prison, Malik is semi accepted by everyone. His dilemma is whether to pick sides and play along or not. The criminal aspect he takes no issue with, let's just say.

Jacques Audiard does love a family theme; normally about the desire to be in one, or the meaning of that there participation. Un Prophet is no different, as within prison Malik simultaneously becomes a family member, yet remains on the outside. L'Etranger. The depth to the film is astonishing, both in its scope, intricacies, humanity and also in ability to brutally convey the world from a prison cell. Hence the brilliant tagline. I don't do spoilers, so please survive on the vague depiction of it as being a gripping prison drama.

Technically everything about the film is perfect: the writing, the cinematography, the scenes of action, the reality. The acting is class, particularly Tahar Rahim and Niels Arestrup. Arestrup and and Philippe Nahon must vie with each other for work constantly. Both are brilliant, like a French De Niro and Pacino. Depardieu doesn't count; he's Russian. On a real though, everything about Un Prophet screams believable, which considering it features a ghost as a central character speaks loudly as to its strength. A lazy writer might compare that element to Shakespeare. I'm ever so slightly more hard-working than lazy, so I'll just mention it ironically.

The primary function of a film is to entertain, in my opinion, but secondarily also to educate and Un Prophet excoriates a part of criminality to digest like almost no other film. It reminds me of the grey areas of The Wire. A man is presented with many choices, but takes a path so dangerous as to involve much skill. It is risky and whether he lives is always a serious question. Comparisons to the Godfather are fair, but it is a different experience. Unique.

Bedsit it? The skill involved in writing and and acting and not to mention, to then subtitling Un Prophet is close to godworthy. To capture this essay to transience and conviction of self so succinctly and with such amazing subtlety is an astonishing feat and as much as I love an Audiard film (even if they do suffer somewhat thematically with repetition) this is, so far, my favourite of his. 10/10