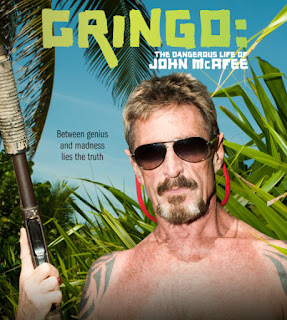 Tagline: “Between genius and madness lies the truth.” Or more accurately “Both mad and a genius” Plus the poster looks like a GCSE project, though it's not like Netflix are trying to lure you to the cinema.

Premise: Netflix documentary focusing on the enigmatic, wildly successful John McAfee (of McAfee anti-virus fame) who may or may not have some skeletons in his closet.

Set up McAfee, check. Got rich, very rich, check. Got somewhat less rich, but had some other schemes, check. Left America for Belize to set up a private army, check. Total psychopath? Well that's up to you, but Gringo is illuminating and gives you the choice, like any good documentary. Let's just put it that way. In a nutshell, internet millionaire John McAfee was loaded and something of a trailblazer, this documentary, which is both impartial and utterly interesting, highlights his life post dot com wealth.

Power corrupts, and absolute power corrupts absolutely. So the saying goes. As power slips from the John presented in Nanette Burstein's film, he grasps harder at the thin air he wishes was solid gold. It is both crime documentary and chronicle of madness, like There Will Be Blood but not 4 hours long and fucking interminable. At one point in Gringo, McAfee is compared to Colonel Kurtz from Heart of Darkness. This is both a lovely literary touch, and somewhat fitting- although I personally think that the character doesn't change, only the scenery.

John McAfee is, almost without doubt, a psychopath. He ticks all the PCL-R boxes and Gringo peels those layers away brilliantly. He's a cunt, basically. But a highly intelligent, high functioning, glibly charming cunt. Watching a psychopath transition from high flyer to what you're presented with by the end of the film is both fascinating and terrifying. But the film is about more than just that cunt. There's the others, the humans who brushed past him and had their lives unalterably changed. As with many documentaries concerning human love and loss, there are moments which are emotionally shattering. If you feel love for these people, and you should, then congratulations, you aren't John McAfee.

I'm at risk of downplaying the human cost to McAfee's selfishness. It is real and raw and presented so well in the film. The victims are both brave and utterly compassionate, intelligent and understanding; but raw and angry. From a storytelling perspective it is withering, but the mystery behind Mr. McAfee is what fuels the doc. Alongside the bafflement of Belize as a place. “Our murder conviction rate is bellow 3%” Are you kidding? The Victorians did better than that! While absolutely everyone from Belize comes across well in this, even the murderers, that's atrocious. Jack the Ripper is probably still alive and has a beach-side apartment there.

Bedsit it? Without doubt. This is brilliant, excoriating, investigative film making. Gringo is on Netflix and so you have no choice! In future they'll just beam films you might like directly into your eyes, but for now, there's Netflix. Watch it you bum! 9/10