You Were Never Really Here (2017) CINEMA 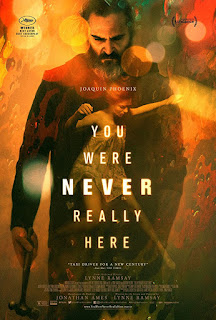 Tagline: “This life is the only one you've got.” This film is an hour and a half of that one life.

Delivery: You Were Never Really Here (YWNRH) has the 80's-esque score and broody, silent lead man reminiscent of Drive. Only in Drive Ryan Gosling is a dreamy psychopath with aquamarine eyes you could swim in, not a scruffy PTSD sufferer in a hoodie. Having said that, despite not making me reconsider my sexuality (and seriously questioning my choice in men were I to switch teams), Joaquin Phoenix's Joe loves his mother and is genuinely terrifying in a much different way to The Gosling.

YWNRH feels throughout as if there is some timeline deception going on, or some slight of hand that you, the viewer, who the film is (presumably) made for, can't see. Even when things are happening, it doesn't really feel like things are happening. But it does have that feeling that everything is going to quite brutally kick off at any minute... Right up until the end. When the credits rolled I honestly thought it might have been a joke. Tense, subtle and understated are rightly applied, but fucking hell, are you not entertained?

Not entertained, no. Though there are positives if you rummage enough in YWNRH. It's easy to forget quite how good an actor Joaquin Phoenix is, mainly because he went AWOL for a period. They say a film is only as good as the baddie, well think how fucking creepy and contemptible his Commodus was in Gladiator. He then went on to trick the world into thinking he'd lost his mind. Or covered having lost his mind by tricking the world into thinking it was all a stunt, whichever is true, fair play brah.

Style is pretty much all YWNRH has for itself, it lolls between the ethereal and stark reality. Always, it seems, from the perspective of Joe. Do you like hallways and alleys, for example? Because this is a thesis in them. Lots of shots of Joe walking up alleys and hallways, or down alleys and hallways, sometimes he just has a little sit in alleys and hallways. You don't like hallways? Well what if I told you that YWNRH is filmed forwards, backwards, upside down and in reverse, presumably to try and convince you there's more substance to it. Not doing it for you? Me either.

Bedsit it? I honestly wouldn't really recommend even seeing this at home. It is wanky pretentious titillation. Without looking I'll guess the Guardian gave it four or five out of five*, and if you want to take the word of a long established newspaper over my rambles, then on your head be it. Has its moments but never really appears. 5/10

*UPDATE: I have checked and they gave it five out of five. Of course they did.