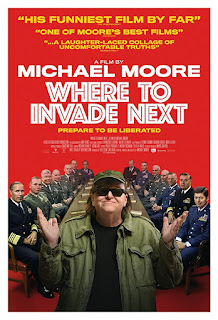 Tagline: “Prepare To Be Liberated”. Sardonic. I love it.

Premise: Michael Moore travels the globe, visiting countries to see what ideas, principles and practices he can “steal” to use for America, which obviously sucks (his opinion, not mine... ahem).

Delivery: My favourite stand up, Doug Stanhope, the irascible American alcoholic, once said that “America is the greatest country in the world, but that's like being the hottest Denny's waitress.” Damned with faint praise. Now I know I have a bit of a pop at the USA on this blog, and that's because they're an easy target. Sedentary, even. For all my jokes, I have a great many wonderful American friends, and as a country it is both a beautiful, awe inspiring and welcoming place. Although to be fair, I am white. It is perplexing, having such strong feelings at both ends of the love/hate spectrum for the place, and I think that's why I make jokes, to cover the cracks in my logic.

Michael Moore is similarly perplexed, and decided for his 2015 documentary Where to Invade Next, to “invade” other countries around the world and examine how they do things that the States might not do so well, to put it politely. Moore travels the globe with his trademark, subversively glib, knowingly smug, self deprecating questioning style, talking to citizens and politicians, police and prisoners and anyone he can about the area of life he's interested in knowing about in their country. I'm a fan of the guy, but I do get why people might not be. The film is of course very left wing, but again that's fine by me.

There are some moments of pure comedy in the culture clash, which of course Moore hams up for effect. For example, the French school children looking at pictures of American school lunches sent to Moore by a crew member's high school age daughter is absolutely hilarious. It's almost as if it's been faked and to get the horrified reactions he's actually showing the children Two Girls One Cup, “seriously, what is that? A bizarre sauce?” (genuine quote).

Moore does make some rather lazy jokes about the places he visits, but I'd be a massive hypocrite if I criticized him for lazy stereotyping, or even for hypocrisy, so I won't. Just to say it might annoy those of you who aren't stereotyping hypocrites, you perfect fucking bastards. On the whole, though, America (the UK, too) could do with taking an idea or two of how to treat those irksome humans who populate the landmass the rich try to exploit. Where to Invade Next is funny, at times touching and very insightful, even if the suspicion Moore has cherry picked particularly good examples to use persists.

Bedsit it? Where to Invade Next is not, despite the poster's claim, Moore's funniest film. Or his best. He's not angry here, and I know first hand that anger can be a great fuel for change. The documentary feels a lot like he's tried to make it more accessible for the less left wing focused viewer; more genial, tongue in cheek and laid back. Oddly, more patriotic, too. The fact remains though that on third viewing I still enjoyed it. 8/10