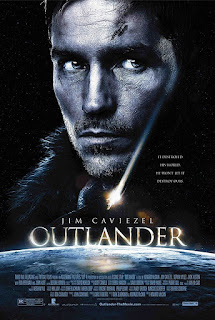 Tagline: “It Destroyed His World. He Won't Let It Destroy Ours.”Is it religion? Because if it is religion, the idea of Jesus coming to our planet to stop religion from destroying it would be too funny. Ah, no. It's a space monster. Of course it is.

Premise: Sadly Outlander isn't that meta, Jesus fighting religion would have been brilliant. He does fight a big fucking monster though, with Vikings! Yes, Outlander is one of those sorts of films. Hold on tight dear reader, shit is about to roll down hill, right towards you.

Delivery: “No one beats Wulfric at shields!” I first watched Outlander about ten years ago, when it first came out, at home on DVD. I remember rather enjoying it and thinking it was a bit unique and out there. I thought I would rewatch it for Bedsit Cinema, to see if I was right. I have in the past, prided myself on my ability to remember a lot about the films I've seen. Turns out I don't remember much about this Viking/ Sci-Fi/ Creature Feature mash up.

I had forgotten John Hurt was in it and when I saw him it just made me sad, because he's dead, of course, but also because he's in Outlander. Still, who could pass up topping a bill with Jesus? Outlander also has Jack Huston in, which is weird as I've been rewatching Boardwalk Empire lately and I'd always assumed he materialised from the ether to play Richard Harrow. Who else is in this film that I'd forgotten about? I'm going to check IMDb now. Ah Ron Perlman! Did Gob slip me a forgetmenow after I saw this first time? Jesus my memory sucks. Oh sorry, I shouldn't take your name in vein, I know you're busy fighting an intergalactic behemoth.

The first thing that struck me on rewatching Outlander was how poor the sets and CGI are. Not to mention much of the action looks dated or done on the cheap. IMDb lists the budget as $50m, but to paraphrase Chris Rock, someone had a pair of $49m trainers on. The basic premise is that Jesus (Jim Caviezel) crash lands his space ship into Norway some time ago while chasing a CGI monster that looks like it has been to a neon paint rave. As I'm sure you can imagine, if that doesn't float your boat, Outlander ain't for you. Even if it does, well, don't say I didn't warn you.

Full disclosure, I did go to make a cup of tea without pausing during Outlander. Why didn't I pause, you ask? Well, watch Outlander and see if you don't do the same. Those were valuable minutes I was actively not watching Outlander. It did make me wonder if perhaps, a bit like how if you watch the Director's cut of Kingdom of Heaven, it is a brilliant film rather than an average one, Outlander with the five minutes of exposition I missed, is an average film, rather than the bowl of phlegmy-mucus being served up here. With no spoon.

I wanted to review Ironclad instead of Outlander, but I couldn't find it. At first I wasn't too bothered but the more the film went on the more I was craving some Paul Giamatti hamming it up and spiked maces to the head. Outlander is just a crazy, poorly put together action film with very little tension and not even much in the way of interesting gore (bar one moment). The main characters are Vikings, but they have a mix of posh English and Scottish accents, as well as Jesus's American one, of course.

Bedsit it? I love a B-movie, I really do, so this kind of film I could ordinarily tolerate even the badly put together aspects; but it's all so joyless. It's not camp fun, Outlander is more dreary half-effort. Like a film concocted by stoned students who were too baked to be arsed finishing it properly. According to IMDb I gave this a 7/10 in 2008. I must have been off my tits. 4/10