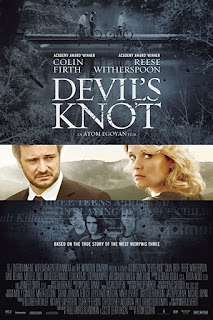 Tagline: “They say the crimes were satanic. The truth may be scarier.” But still perpetrated by a human, like all of life's misery. Directly or indirectly. If your life sucks: it's a human's fault. In my case, mine.*

Premise: The heinous murder of three children in West Memphis in the early nineties, retold in a fictional film in 2013. It sounds so awful when said like that, doesn't it, and I'm struggling with why I decided to review it, but I do have a reason, and it wasn't just because I had decent notes on it.

Delivery: I'm not going to go into details of the actual case. But. Suffice it to say that in Devil's Knot the police are portrayed in as bumbling idiots who would rather cover their own mistakes up and knowingly prosecute innocent people than admit error; and that I can believe that. REMEMBER, this is a real case and if you really care, look into it properly, and maybe watch this film though I suspect it is largely a crock of fictional shit. Like most films. Did you know Saving Private Ryan isn't a real story? Omaha beach was actually a fucking picnic, no one really died. Private Ryan was real though, he went on to star in all those gay porn flicks.

Bedsit Cinema is a blog poking fun at, and when called for, celebrating, films. Only films I can find holes in to poke fun at, or celebrate, it must be made clear, not the real events those films are based on. I've said that three different ways so if you're offended, fuck off now, you jizzmunchingcuntpuppet. Dammit, now I have to add jizzmunchingcuntpuppet to my dictionary.

To the film, at last. Devil's Knot is a hard one to talk about, because on one hand it is a true story fictionalised and I don't want to spoil it, and on the other because it is as uneven as my mood. There are moments where I was deeply upset by the film, in the way that it intended. There is one scene which was also harrowing; deeply and rightly so. Having said that the film ricochets between interesting and a bit dull as the court case, dramatised family lives and po-leece investigation judder and grind, unable to find a harmony which hums.

Devil's Knot was a film which I'd pulled off a Poundland shelf, and had not heard of before. My prejudice and apprehension was because of that, and to be fair it was largely founded. This isn't a great film, but it is one which draws attention to an area which should have more light thrown on it. There's my reason, see the film, look at the case- the real life events, see if you don't see something worth talking about.

Bedsit it? Devil's Knot is not a great film. But neither is it a bad one. What it is, is sincerely and lovingly made, and as even handed as one can be about this horrible crime. Even if narratively speaking it is imperfect. For all that, it is a fascinating real life case, and if Devil's Knot is your gateway to it, that's no bad thing. 6/10