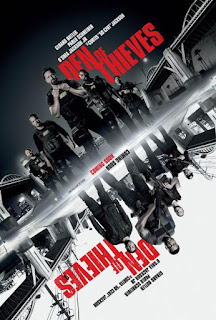 Tagline: “Guns! Muscles! Men! Grrrr!” Ok that's not the tagline, but it should be.

Premise: Something about double crossing? Or was it stealing? Honestly, the plot is irrelevant. If you're watching Den of Thieves for the plot, then you probably bypassed the popcorn stand because you had sandwich bags and superglue instead. “Premise” is too grandiose a word for it. IMDb calls it a “gritty crime saga”, the word I'd use rhymes with gritty.

Delivery: Den of Thieves is like a retirement age prostitute who can't be bothered anymore to lie to you convincingly. It knows what you're there for, that agreement is tacit; shooty bloodlust. But after taking your money it drily tugs you off for almost two and a half hours, never really servicing your needs properly. Not only is there no happy ending, there was a miserable start and it only got worse as valuable minutes of my life spilled out of me like, well, I'm sure you can finish off that metaphor.

The whole film is so macho there should be mental health warnings attached to it; these are flawed, un-real men. The kind of men only divs aspire to be like. If you're stupid enough to mistake this, or these characters, for reality then it's going to come as a shock when you realise Brexit wasn't the X Factor. Which I like to believe people did, because the realisation that over half the country is wantonly thick and/or racist is just too much for me. Of course the Tories were lying to you, THEY'RE TORIES*.

The worst thing about Den of Thieves is that despite my already low expectations, and telling myself I'd settle for explosions and action, I was still horribly bored by it. My notes read, “Good lord it is at two hours now and I've officially been bored longer than the duration of most films.” The action is flaccid, about as much use as Stephen Hawkings cock. And before you scream that's ableist of me, I mean because he's dead, not because of his disabilities in life which, while a bit noticeable, didn't seem to prevent him putting it about like a wheel mounted Lancelot.

I don't need to write a fourth paragraph; you all know I hated the film by now. I might have even managed to convey why (the Tories, limp dead scientist's penis and bad handjobs from elderly sex workers- what could be clearer?) However, there was one cliché, of the many which Den of Thieves vomits at you, which stuck in my craw. Helicopters. It's a trope used in many films, but why do bank robbers and hostage takers always ask for a helicopter? When has a police force actually given a chopper to bank robbers and why would that ever even be a good escape route? It makes zero sense, but then none of Den of Thieves does so in that respect it was at least consistent.

Bedsit it? If Den of Thieves had any higher aspirations it'd be an early front runner for The La La Land Award. It doesn't, it aspires to very little, and doesn't achieve even that. Enough people clearly didn't ask for their money back after seeing it, though, as a sequel has been green lit. 2/10

*I am well aware that all politicians are lying cocksuckers, but I just hate the fucking Tories so much, man.