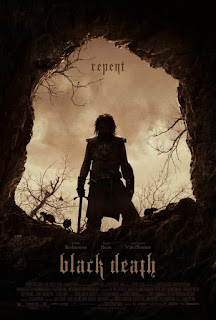 Tagline: “Repent”. There's a longer one but it's wank. Repent nicely fits the film. Great poster, too.

Premise: Set during the first outbreak of the plague, or “Black Death”, in England, Ulrich (Sean Bean) leads a small group of soldiers and miscreants to find a village rumoured to be free of the disease. For some reason they're joined by a young monk, harbouring a secret.

Delivery: Having watched the terrible Outlander, and unable to find Ironclad, I settled on rewatching Black Death to sate my medieval bloodlust. Was I sated? Like a monkey in a zoo*. Black Death has no right to be as good as it is, a sort of road movie- action- horror it has a magnificent cast for a smallish budget film: Sean Bean, Eddie Redmayne, Johnny Harris, Carice van Houten, Tim McInnerny, Andy Nyman, Emun Elliot... The list goes on. The director, Christopher Smith, also made Creep and the very funny and gory Severance, but this is by far the best of the three.

As the plague destroys society in London, for reasons not made too explicitly clear, a monk is asked to join Sean Bean and his cronies on a journey to a small village north of the city, where the plague has mysteriously not reared its puss filled armpit. The church are naturally suspicious, this being a time of witchcraft and sorcery, they want to maintain their monopoly on the supernatural. Eddie Redmayne, in his breakout role, plays the young devotee, Osmund, who travels with them. He has his own reasons for going north. The journey is, of course, fraught with danger, not least the insidious disease which is throttling the country.

Sean Been has been bastard hard since 1993 (Sharpe), but in Black Death he's also a bit of an actual bastard, which throws a spanner in the works of what would normally be some heroic situations. I rather enjoyed that element. Osmund flounders horribly in this brutal world, a young man of ideals and unapplied morals and virtues, some harsh lessons come his way as the group ambles towards the village. Tim McInnerny is brilliant as the leader of the weird little enclave, and I'll stop there, because you should really see this film.

Black Death is brutal, believable and belies its modest budget. The film makers have kept it lean, holding it together largely with strong, committed performances and excellent writing. The film's real depth of meaning, the rot that hatred can cause in the absence of love, is delivered with a lightness of touch in contrast to the rest of the film. It left me wanting a sequel. Also, it's a well trodden path, the brutality of medieval weaponry, but if the Misericorde doesn't creep into your consciousness, then you haven't been watching properly.

Bedsit it? Yes. If it sounds like your cup of tea. It's not Braveheart, it's smaller scale and much darker, but I have now watched it three or four times and Black Death's score has not wavered. 8/10


*Nope, me either. It just sounded right.