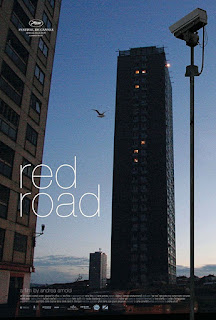 Tagline: I wouldn't want to write a tagline for Red Road. I'm glad I can't find an official one.

Premise: A CCTV operator in Glasgow sets out on a mission.

I'm sorry for the last few reviews. Written using notes taken prior to my loss of sense, and delivered when I was not in a place to put them together properly-reading them back later I was horrified. I cannot promise this will be better, but I know you all only read for dick jokes anyway, not my poetic prose. I was requested this review by someone I love dearly, and eventually found the time and concentration to watch it*. Once I had, though, reviewing it became a forbidding task; as I will try to explain.

Delivery: Red Road should be called Red Herring, for all the misdirection it contains. It is a film which could, potentially, be ruined by a casual spoiler in the review. I'll avoid those to the best of my ability**, whilst remaining as in-tone as I can, for a two hour calvaire such as this. Red Road is not a film to make too many jokes about, even dick ones, which I know is disheartening, but stay with me. All of this adds to the difficulty of this review. Hard subjects, no humours. But I was thinking about Red Road days after seeing it, and I think you will, too.

Red Road doesn't do exposition, events simply happen in front of camera. Social realism, or filmic realism or some kind of realism which sounds like I know what I'm talking about. The time line shifts to give you hints, but not enough to fill you in. The brilliant Kate Dickie (of The Witch) plays Jackie, a CCTV operator responsible for covering an estate in Glasgow called Red Road. I think that's where the film got its title from. Jackie is clearly from an area near the estate, as she basically spends her days indulging in the most modern form of curtain twitching. I know it is what we would all do, and I also know it is why she should have been given a different area to peruse.

That oversight (?), for me, was the first of a few plot holes in Red Road, the rest of which I can't say as they're spoilers. The film starts slowly, as you to and fro about what the  heck is going on. Five minutes in I was emailing said friend with theories. They were all off the mark. What is obvious, though, is that Jackie is a very damaged woman, one hurt by a past wrong. The perpetrator of her wrong, she one day sees on her video scouring of Glasgow's least upscale areas. Urban Glasgow looks a lovely place, by the way. Scenic tower blocks as far as the eyes can see. It's like Peckham without the hipsters, but just as many skag fiends. Now that Jackie has seen him, though, the chase is on and truths unravel.

Red Road doesn't set itself up as a mystery, initially. But it is, in many ways. A social realist mystery with flourishes of colour and complexity. Visually it is astonishing, so brilliantly thought out and executed. The disparity between subtle use of colour, and very stark use of it makes what would otherwise be a gloomy film, seem less gloomy. In other words it is a distraction, because Red Road is gloomy as all fuck. There is depth to the writing, the characters grow, learn and have more to them than they otherwise may in a lazier film. Despite its missteps, Andrea Arnold and Red Road has stuck with me.

Bedsit it? Did I like Red Road, not really, initially, because of the many plot holes. But there is so much to it, it's so sprawling, emotional, poetic and in parts meaningful; it kind of got to me. For a second feature it is towering. The fact I am still thinking about it speaks volumes. Red Road isn't an easy watch, but then cinema shouldn't always be that. I do want to see Fish Tank and American Honey, Arnold's films since, just give me time to process this. 7/10


*By the way always feel free to request films or engage with the review in any way you see fit. Provided it ain't shit through the letterbox.

**My level of ability being barely competent.