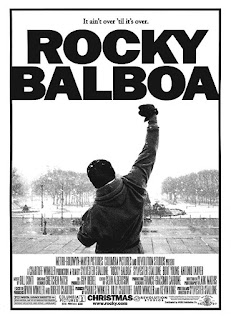 Tagline: “It ain't over 'till it's over.” With Creed 2 inbound and looking increasingly pony as details emerge, it ain't over yet.

Premise: Film number six in the Rocky series, about simple but loveable “heavyweight” (Sly Stallone is a kind five feet nine) boxer. He's getting on a bit, Sly was sixty when Rocky Balboa was released, and he comes out of retirement to fight a current champion, played by real life boxer Antonio Tarver, after a TV show simulates them fighting.

Delivery: You might not have noticed but I rather like the sport of boxing. I like most boxers, trainers, promoters and journalists I meet, too. But I don't like every boxing film I watch. It's a bit like sex, you see. I love sex- or at least I enjoy the distant memory of it, but that doesn't mean all pornography is great or well done. In much the same way, there are some stinking combat films, although admittedly I'm not watching for anything like the same purposes. Rocky Balboa sees a now fifty something “Italian Stallion” in a bit of a funk, and go for one last shot at glory in a supposed friendly bout presiding heavyweight champion with Tarver's Mason Dixon.

Rocky's son is an ungrateful twenty-something, he has a fairly average restaurant and bar which trades cynically and a little depressingly on his past success in the ring, and his brother in law, Paulie, is still a grouchy glass-half-empty, misanthrope. Paulie is the polar opposite to Balboa, he always has been, and their chalk and cheese schtick still entertains. Rocky is still popular, a little, and still endearingly easily pleased. Mason Dixon, however, is an unloved, undisputed, current heavyweight champion in need of a career shot in the arm. Echoes of Rocky, without doubt, but by the same yard stick it could be argued that every war film is just people killing one another.

They throw in plenty of real life boxing people; Michael Buffer, Lou DiBella, Mike Tyson and even the consistently inconsistent Las Vegas judge Adalaide Byrd is mentioned. If you're a fan of Rocky, you'll know what to expect, training montage, underdog story, fight scene. The fight scene, while admittedly a bit “Hollywood”, is expertly executed and engaging. It is so good to have Rocky back being Rocky, and despite his age, inactivity and lack of a boxing licence, it is far more believable than it sounds. That authenticity is testimony to Sylvester Stallone's skills as a writer, director, and actor; the empathy Rocky engenders is almost endless. Let's see how Creed 2, fares, first though.

Although, admittedly, all of this endearment is probably only if you've already bought into to the Rocky story. If you're a sports film fan, or even a boxing fan; If you've never seen a Rocky film, start with the first one and build to this would be my advice. But get going, as they're absolutely brilliant. They didn't used to make six, seven, eight films in a series back when Rocky's story began in the 1970's, there was no Rocky "universe", although there soon will be. That isn't to say Rocky Balboa is the sixth best film, Rocky Balboa is a muscular (HGH), thrilling beast. It ain't over 'till it's over.

Bedsit it? The reason Rocky Balboa works is precisely because of the hardships Rocky faces in the film. As one character says to the lead, “you don't move aside for nobody until you're ready to move.” It is a film about last chances, about doing what you love, and about love, in its own ways. Oh and it's about boxing. What's not to like about that? For me, the second best Rocky film. 8/10