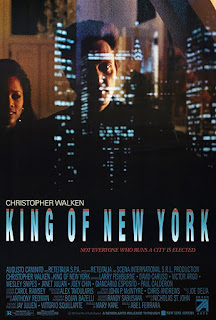 Tagline: “The cops tried to stop him their way...Now they'll have to do it HIS way.” No vaguely sexual undertones there, which to be fair, sets the bar for the film.

Premise: Ex crime boss Christopher Walken is released from prison. He kills everyone.

Delivery: King of New York is not a film which sells itself on high drama, by which I mean that it is knowingly trashy and subversive. I suppose what you might call a sort of B movie, even though those were basically dead when it was made. Restored nicely and released by the great Arrow films, a distributor dedicated largely to independent cinema and cult horror. I was surprised and pleased to see this in the CeX near me, and snaffled it up immediately as it has been on my watch list a while.

Although it has some quality names in the cast, led by Christopher Walken and including Lawrence Fishburne, I was under no illusions going in to King of New York about what I was going to get, I’d hoped there’d be some nice low budget surprises though. A lot of the sort of cult/ 80’s horror/ exploitation films I like to watch have something genuinely inventive or unique about them. Be it creative gore or a decent sense of humour, anything to add viewing value to a thin budget. I had hoped for the same with KoNY (Ha! Jacking it in San Diego!) I didn’t get it.

There is an inordinate amount of sexual threat in KoNY. I don’t mean suggested cleverly by the director, I mean said overtly by almost every character. Everybody thinks the worst thing they can say to someone is threatening to rape them or suggesting being a power bottom might be the worst thing in the world. Even in 1990 that surely can't have been ok? When did going to town with one in the brown* become popular? I'm sure it was before then, anyway. It’s not like they were cleverly referencing some new thing only weirdos are in to.

While KoNY knows it is trashy, it isn’t fun, trashy, it’s more like a sixth former tried to remake a Brian De Palma film. Classless and predictable. Actually saying that it’s exactly like a Brian De Palma film. If only Brian De Palma didn't have aspirations to make good films he could have got away with making the kind of cult, moderately offensive shit that this is, and I wouldn't hate him so much. The man has never made a quality film, which is fine, but he's clung on to Coppola's ascending ring piece fleece like a stubborn dangle-berry for about four decades.

De Palma rant over. Ultimately there just isn’t enough about KoNY to make it anything more than just a fairly nasty, violent piece of substandard film making. While I like gore, and KoNY is very bloody, there isn't much aspiration to be inventive with the claret letting. So it doesn't even score points there. It’s got a cult following, sure, but the fact that it is name dropped in 90’s gangster rap a lot, which is where I heard of it, should have been my clue. These are the same people who idolise Scarface.


Bedsit it? If you’re a 90’s gangster rapper, sure! But if you are it’s no doubt on the curriculum at gangster rap school, or wherever they finesse their trade. Really was quite disappointed. In fact almost the best thing about KoNY is the acronym it allowed me to create, reminding you of that awful tosser (pun very much intended) and that hideous scam lots of idiots put money into. 4/10