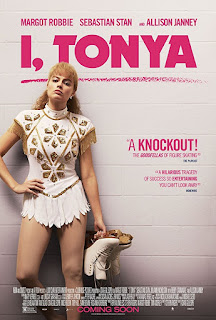 Tagline: “There's no need to have class when you have talent.” Is that how you get away with it? I'm fucked then.

Premise: Story of working class figure skater “Trashy” Tonya Harding who despite her imperfect upbringing rose to be the most infamous woman in America, before the internet! Solid effort. Infamy was less fleeting then, too, which has stained her memory.

Delivery: Writing is hard at the moment, so please bear with me.

I, Tonya is a dramedy which raised a few thoughts in my addled brain. These thoughts may fire off at random, but don't worry America: your teacher is armed.

Quite how famous ice skating made Tonya Harding is proof that the Americans will wank themselves blistered if you achieve anything at all while representing them. In spite of my overt hatred of other people's joy and cause for celebration, part of me admires that. OK, much of me. However it's tempted by the knowledge that you could shoot up a school in a Team USA top and you'd honestly still have fans.

I've not been a fan of Margot Robbie so far; she was only really eye candy in Wolf of Wall Street and Tarzan, not her fault though, they were high profile roles in better than average films. She was in Aussie soaps my nan fell asleep in front of prior to that. This is not to slag her off it's just why I wasn't huge fan. She could have been unbelievable, Oscar worthy, in Suicide Squad but given that ten minutes of it felt like someone trying to force feed my eyeballs a sloppy poo, I wasn't paying too much attention. I was just hoping it wouldn't drip into my mouth.

I, Tonya is very droll, it's not a “ba dum!” type of comedy. It is funny, sure. More moderately amusing, interesting and engaging though than jazz hands jokes. There are funny moments, laughs, but a bit like The Martian a few years ago it has been wrongly called a comedy*. I entered the film only knowing Doug Stanhope and Tonya Harding crossed paths once in a hilarious boxing match some years ago, and because of that I knew her name, but not who she is. Clearly a talented and hard working woman, Tonya was pushed tirelessly and lovelessly by her mother. Harding got dealt a fairly shit hand in life, she worked desperately to make it out.

Tonya telling a judge to, “suck my dick” is my favourite line of the film. Hard working and talented maybe, but she's also a bit of a cunt. However Harding was a mould breaker and being a cunt in those circumstances is more acceptable, especially as was mentioned, when you have talent. Being a cunt when your biggest achievement is an obscure film blog is not acceptable. But you play the cards you're dealt. My main criticism of I, Tonya, is that it has no longevity, in terms of rewatches, but that's no bad thing. It is well made, entertaining and a break out role for Robbie, but the film's depth ran out before it's knees were shattered. Allison Janney is excellent as Tonya's mother, LaVonna, too.

Bedsit it? I, Tonya is at cinemas now, and Tonya Harding is a very interesting lady worth watching to learn about; a good skater with a better chin. Which isn't meant to be funny, given the domestic abuse, it's more to say the woman endured a lot, showing better chops than I or many others would have done. Also, I'm now a fan of Margot Robbie. 7/10

*In order to try to win it some awards