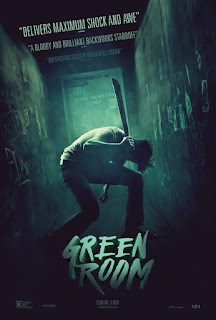 Tagline: “Now. Whatever you saw or did. Is no longer my concern. But let's be clear. It won't end well.” The character who says this is in fact right, and it's a good line, but a crap tagline, which is probably why it was barely used. The poster (tagline absent) is excellent, however. I might buy it.

Premise: Punk Band the Ain't Rights get booked on a gig in a back-woods venue which turns out to be a Neo Nazi joint. The band accidentally see something they shouldn't and wind up in a sort of hostage/ siege hybrid with the racists, led by Patrick Stewart's terrifying Darcy.

Delivery: I first saw Green Room at the cinema, after being blown away by Jeremy Saulnier's Blue Ruin, starring the brilliant Macon Blair; who appears in Green Room as a key character. Blair is a talent to keep an eye on, able to shift between empathic and sinister with ease. Though If you don't know Jeremy Saulnier's work, you need to get on board quickly. He's such an exciting, fresh, director and writer, whose third film I am incredibly excited about. If you haven't seen Blue Ruin, consider this your early warning to go and see it. Don't make me come round there.

Green Room is an ensemble piece with Stewart, on cracking form, the main “name” within it. The mostly young co-cast reads like a who's who of actors recognisable under the punk style from other things you've seen them in. Oh look it's him from This is England! Maebe from Arrested Development! The girl from 28 Weeks Later! That lad from Peaky Blinders!* Err... Patrick Stewart! Of course, Anton Yelchin is also one of them. Green Room was the last film he was in that was released before he died. He was an incredible talent, and by all accounts a good bloke. Very sad.

Anyway let's stop lamenting a real life death, and enjoy some on screen fictional ones! Green Room is bloody, and so brilliantly uniquely violent as to be influential. I honestly believe Saulnier's style will be as potent as Peckinpah's on how violence is depicted cinematically. There's no glamour attached to the gore, it's imbued with a realism which makes it hard to see, believable and human. The violence is where the horror lies. That's what you fear after it starts. That's what the characters run from, not skinheads; the pain that comes with them. Watching you'd think Jeremy Saulnier could write a thesis on screen savagery. As it stands he's written and directed two, so far, Blue Ruin and Green Room.

Green Room is lean, mean and grisly. Regular readers will know I was nauseous after suffering most of The Light Between Oceans, I put this on immediately afterwards. Still nauseous, but good nauseous; if that's a thing. The action is tense, and you never know who's going to live or die as the absurdity of life meets death's jaws in a  maelstrom of brutality. The heartbeat of the film is the fear of pain and death and it's so grimly believable, which is why the Green Room works so well.

Bedsit it? Well obviously, and see Blue Ruin, too, you bum! Green Room has such immense rewatchability, it might end up in my all time top ten. 9/10