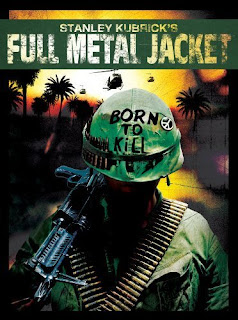 Tagline: “One Rifle, One Gun. One For Killing, One For Fun.” The sex and violence pervading Full Metal Jacket's tagline is only the beginning.

Premise: Stanley Kubrick's penultimate film, focusing on the journey of conscripts in the Vietnam War. From training camp to front line.

Delivery: “Did your parents have any children that lived?”

In a way, while I love writing about films for Bedsit Cinema, sometimes I write about a film and I hope that everyone has already seen it because it is so good. Another, more pragmatic part of me hopes nobody has, because I know people are lazy gobshites and won't read the review of a film they've seen. The truth probably lands in the middle, I suspect, but rest assured I'm needlessly making myself worry about it regardless. I do it for you, dear gobshite. Full Metal Jacket (FMJ) is definitely one of the films I wish everyone had seen. It should be shown in schools, which I admit cheapens it a bit because schools are awful places.

The film begins in a US Marines training camp, with a much lauded opening montage, dripping in symbolism, as the new recruits are literally shorn of their identities. Stanley Kubrick doesn't let the subtext stop there, however. As new recruits Joker, Pyle, Cowboy and their counterparts are overseen by the oppressive omnipresence of Gunnery Sargent Hartman, played by the great R. Lee Ermey. Hartman's a tyrant, but he is funny, if sadistically so. We watch as this group of young minds is slowly fashioned to think the same way as an overbearing, racist, bully.

FMJ could almost be a buddy movie, as Private Joker is forced to care for the infantile and inept Private Pyle, but the signs are there that the sadism either makes or breaks you as a person. Quite what it makes those who don't break is another question, a question which  Kubrick then tries to answer in Full Metal Jacket's war section. Is Hartman blunting the recruits from cruelty, or teaching them it? I've long found the classroom to be a torturous place, but then I went to a Catholic all boy's school. The actors are all perfectly cast, and in particular FMJ made a star of Vincent D'Onofrio, who is a Bedsit Cinema favourite. A six foot four chameleon.

The Vietnam War is now famous for having been a sandbox for psychopathy, a green light and go for morally repugnant dreams and desires. A sandbox mostly enjoyed by American soldiers, as if they were in Westworld. No strings attached. The USA went to a country already deep in a hundred years of war and fucked it spiritually, metaphorically and literally like it had never been fucked before. For my American friends reading, that is not meant as a compliment, before you go high five-ing your buddy Butt Head.

Kubrick was not only an intelligent man and film-maker, he was a critic, a reader and a theorist. He posited some of the most jaw droppingly accurate analysis of western 20th Century cinema. Mainly about war and power, FMJ being no different. Nothing he made missed a beat by way of farther reaching thought, and while I disagree with some that every shot, every chord, every word of a film has (or has to have) meaning, I refuse to believe he didn't have some of his ire woven into Full Metal Jacket. It stinks of a war film made by a pacifist.

I'm getting to the end of this review, which looking back is a depressing post about lies, rape, racism and brainwashing. Entirely appropriately. Each of the three core Vietnam war films offer something different. Platoon is the soldier's perspective, Apocalypse Now is essentially power corrupts, and Full Metal Jacket is the literary criticism. An overview. Joker works for Stars and Stripes, and there is a banner on the wall in their office proclaiming, “First to go last to know: we defend to the death our right to be misinformed”.

Journalism reached new levels of access in Vietnam and it is no surprise that the brilliant Michael Herr has his hands in FMJ and Apocalypse Now. If you haven't read Dispatches, you have no excuse not to because I've hyperlinked to it and it is probably the best book I've read on The Vietnam War.*

Full Metal Jacket's final fight scene is absolutely perfect; pure symbolism. A brilliantly constructed scene, set up to be the perfect microcosm of The Vietnam War from an American perspective. Kubrick was a genius, and proves it because he then one ups that scene with a very simple final shot, which is absolutely the perfect circle of the ethos Full Metal Jacket has had Hartman spew in your face since the first ten minutes. I knew he was getting at something, and here it is laid tastefully bare, like a Rodin nude. With skull fucking.

Bedsit it? I've spent more time talking about Full Metal Jacket than any other film I've reviewed thus far on Bedsit Cinema. Yet it was also one of the easiest to write. Bedsit the shit out of it. Find it in a cinema which shows old films, even better. Some of the action is dated, sure, but it isn't a Vietnam War action film in the We Were Soldiers somewhat insensitively is. FMJ's imagery carries the war element. Unique and so iconic it's still pervasive in western imagery of the war. 10/10

*Possibly tied with either of the Tim O'Brien efforts: If I Die in a Combat Zone and The Things They Carried. Read them all, you bum!