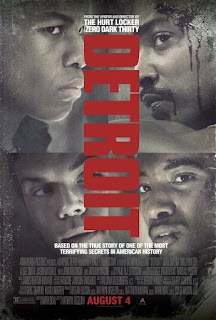 Tagline: “It's Time We Knew”

Premise: The harrowing and despicable case of Detroit Police's brazen state sanctioned murder of innocent black people in 1967. I'd be more specific, but frankly given the story, the whole "justice system" was complicit.

Delivery: Detroit tells a story which should make you angry. If you're not a racist. Racists probably love the film. Within five minutes of the start I was angry. An hour in and I was ready to jump in the telly, rolling my sleeves up as if the 55 inch Panasonic goggle box was a magical time machine. And like I could have done anything even if it was. I'm 5 foot 6 and can't throw a jab without losing my balance. As a film, Detroit is very good, and my only complaint is that it's rather long, and feels longer thanks to an hour long torture scene in the middle. If Eli Roth did it, the film would be derided.

However Detroit's strength lies in making you ask questions of your values and the actions of the (real life, let's not forget) people in the film. For me, Detroit is far more important than Get Out, which people imbued with tons more relevance than it has, and originality which it didn't. Get Out is an X-Factor cover of the Skeleton Key. Where the performer has written in a couple of jokes to keep things light. Mind you I get that, if you're watching Simon Cowell, dammit if you don't need to laugh. He's awful.

I understand that Get Out was talking about the insidious, unconscious almost, accepted face of racism. White middle class guilt racism. To me, with that Trump in power, it's not the latent racism which seems most prescient, most dangerous. It is, once again, the racism of Detroit. Institutionally accepted, endemic and outwardly, obviously hateful. The only caveat I could offer the Detroit police is that it seems like a whole lot of these guys are messed up from Vietnam. All the talk of snipers and shell shocked nervousness seem to stem directly from serving in South East Asia. I would say how often are snipers a problem in America, but as we've seen only this week, it's quite often.

Normally I'd argue that relentless hatred breeds hatred (take note ya'll) – only it doesn't in Detroit, the film shows hate breeding a kind of tolerant love. One spliced with anger, and resentment: sure. Which I'm undecided if it is any better. But then I ain't religious. It reminds me of the racist murder of Anthony Walker in Liverpool, whose parents were so properly Christian about it I could cry. It was at once contrary, brilliant, defiant and utterly right. A dichotomy of morality. An eye for an eye leaves the whole world blind may be true but is hard to remain that forgiving in order to execute it. I'd be fucking uncontrollably livid in those circumstances, but then religion is an opiate.

Bedsit it? This is probably the most angry, disjointed review I've written on Bedsit Cinema. That's not to say Detroit is a bad film, it absolutely isn't, but much like I, Daniel Blake, it's made me so angry I've had to leave it alone in order to even look at it again. For me, Detroit is far better than Get Out. 8/10