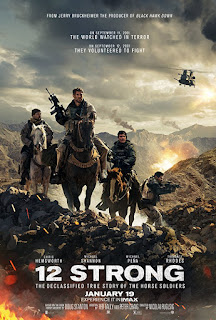 Premise: Based on the true story of a team of US Special Forces who head into Afghanistan in the weeks following the Sept 11th attacks to support the fragile Afghan northern alliance in a push against Taliban strongholds. An exceptional story worth investigating after seeing 12 Strong, so as not to spoil any outcome.

Delivery: 12 Strong, was, I strongly suspected heading into the cinema, going to be awful, American flag waving patriotism. It is flag waving patriotism, but it’s hard not to get on board with that considering the circumstances and setting. Although I have a few minor gripes and stipulations about it. For example, don’t expect much by way of originality, or depth of character beyond the main three good guys. But there are elements which were novel and different, and I at least found it exciting.

I’m a fan of war films. I’ll state that up front. Don’t know why, but I enjoy them and I find battle scenes exciting. The reason I went to see 12 Strong despite not being entirely sold was twofold. Firstly, there was a good chance I’d enjoy it even if it isn’t brilliant. Secondly, if it is a big steaming pile of horseshit I get to slag it off on Bedsit Cinema, and I love a rant. Anyone hoping for a rant, I hate to disappoint at this early stage but, there’s not one coming. Can I offer horseplay instead?

Gripes: Michael Pena doesn’t look like a special forces soldier- the man has a beer gut, and Chris Hemsworth doesn’t sound like an American. The Taliban leader only had one character development scene- and a film needs a strong bad guy. Although I suppose if you’re struggling to find reasons not to like the Taliban, you probably don’t go to watch American films about their being killed. I also wasn’t a fan of the soldier’s WAGs scenes where the main characters tell the Mrs they’re off to risk their lives for King and country. Or Donald Rumsfeld. Or whoever they have in place of George III. Personal taste perhaps but it’s too often a feature of war films lately to wrap that in. For contrast think of how poignant the scenes in Saving Private Ryan are when the men discuss home life.

However, 12 Strong is a very solid war film. The action is at times brutal, and thoroughly engaging and one thing which really made it stand out for me was the use of horses. For the western world, seeing horses charge rocket launchers is pretty hair raising and novel. Although seemingly the Taliban have been fighting with tanks against horses in Afghanistan for donkey’s years, for me it gave the film a unique edge. Though at one point I did chuckle when I imagined a cigar chomping Hollywood film executive brainstorming, “Yah yah I liked that War Horse, but y'know what? Not enough Americans! Or horses! Or rockets!"


Bedsit it? Overall, I really enjoyed 12 Strong, no it’s not ground-breaking, but if you like a war film you’ll probably get along with it as two hour’s entertainment. It is flag waving patriotism, but it could be worse. Strongly reminiscent of Lone Survivor and the French Film Special Forces (or Forces Speciales, because they're flowery like that) which are both worth checking out if you don’t want to leave your bedsit, but I'd say it's worth the effort. 7/10
Labels: 12 Strong 9-11 Action Afghanistan American Bedsit Bedsit Cinema Chris Hemsworth Cinema Film ratings Film review Michael Pena Michael Shannon Movie Reviews Taliban Violence War