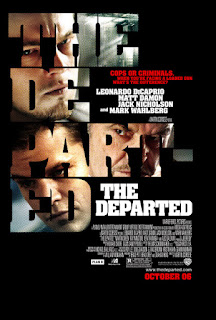 Premise: The police are corrupt and so are the bad guys and nobody knows who to trust but Mark Wahlberg calls everyone a cunt so we have ourselves an Oscar contender!

Delivery: The first time I saw The Departed, I wasn't impressed. Over time I have come to accept that I may have been swayed by some rather loud tutting from some immovably good friends of mine*. While my love for them is unfaltering and permanent, I'll happily change my opinion on a film just because it looked at me funny. Except for La La Land. La La Land could offer me millions of pounds, the chance to bring back In The Flesh, eternal life and happiness for all my family and loved ones, and a Premier League title for Arsenal. No what am I saying these have to be realistic, scratch the last one. La La Land could offer me all that, and I'd, oh fuck it I'd say yes and tell everyone La La Land is amazing. We all have our price, grow up.

What the fuck was I talking about? Oh yeah The Departed. It's a remake of a film from Hong Kong called Infernal Affairs and is essentially a cop-ruption thriller. Which as you can tell from the clumsiness, is a subgenre I just made up. There's a mole on both sides of the cop/ criminal fractions of Boston, and both sides are trying to expose them first. Scorsese throws rat imagery in wherever he can, just to highlight the point. Leonardo DiCaprio, Matt Damon and Jack Nicholson head a wonderfully deep cast, and it's fair to say there's a good amount of violence. It's pretty much what kept me entertained the first time, the gunshots punctuating the tuts.

The thing is, while The Deaprted is a good film, and it really is, there's not a lot I have to say about it here. Nothing funny or seriously critical, it raises no strong themes except that guns kill and sometimes people aren't who they say but they really are but who knows anymore, right? The only thing I can think to say about it is that if two people tut next to you the whole way through a film you ordinarily would like, you might not like it as much that time. Which will lead into a bigger point about cinema viewing I'll make when I review the latest Star Wars.

Bedsit it? Absolutely, if violent cop-spiracy (that doesn't work either does it?) thrillers are your cup of tea. If you really want to test my theory, hire some tutters who don't want to watch to see it with you. 8/10

*You know who you are, please don't hate me!