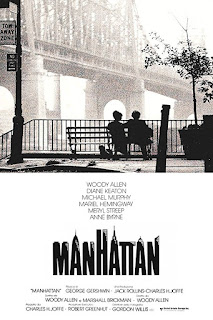 Tagline: “Woody Allen's New Comedy Hit.” Really mailed in the taglines in the 1970's, didn't they.

Premise: Woody Allen plays Ross from Friends, a man whose wife has left him for another woman and who likes to romance in planetariums. Woody is now trying to navigate his way through dating in the New York scene, as a man in his forties with a predilection for teenagers*. COUGH

Delivery: Obvious real life comparison out of the way, Manhattan is a bit of a wildcard choice for me. I had never seen a Woody Allen film before, mainly because I didn't think I'd relate to them much, fully aware he's renowned for essentially playing the same character (his own persona) and that they were all sort of about him being neurotic. That was my educated guess. That guess was right, well half right.

Woody Allen, I genuinely can't remember the character's name and I only saw the film at 7am this morning (I couldn't sleep), is neurotic in Manhattan. But then so is everyone else. Woody is neurotic, insecure, contrarily intellectually pompous, and hilarious with it. If ever someone pulled off having little man syndrome, Allen did. He reminds me a lot of Tony Hancock, or rather Tony Hancock's persona, but with added Jewishness.

Plot- wise you really don't need to know any more than Allen's on the dating scene, in 1970's New York and it's complicated. I couldn't help feeling more complicated than it need be due to every character's inherent neuroses and narcissism. All of the characters except one. Of course being a comedy it would be pretty fucking dull if everyone was just very sensible and honest and there was no conflict whatsoverthankyouverymuch.

Manhattan surprised me in a few ways. Initially that I actually watched it at all was a surprise, when I bought it I thought there was no way I'd get round to it. Well take that past me! It is wonderfully shot and beautiful to look at, too, cinematographer Gordon Willis also shot the Godfather. Yes, that level of beauty. The toing and froing of people in their thirties and forties would have pissed me off earlier in life and put me off the film. It still pisses me off, although now I am in my thirties I accept it as being realistic portrayal, however god damn depressing that is. For me it's very much a case of don't promise the moon, just deliver the horizon. And one final thing which surprised me...


Bedsit it? Manhattan is really good. I feel like the reason Woody Allen was forgiven a little bit for the whole stepdaughter thing is because not only is he very funny, he was also fucking telegraphing it for decades! Anyway, I really enjoyed it, it's very funny, and I didn't fall asleep so as I write this it is 3.30pm and I want a nap. Fuckity bye! 8/10