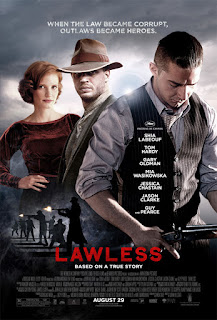 Tagline: “When The Law Became Corrupt, Outlaws Became Heroes. Based On A True Story” Honestly did not know this was based on a true story and quite frankly given some elements of it, I'd have toned that down.

Premise: Hardy, LaBeouf and Clarke play brothers with that famous familial quirk of looking nothing whatsoever like one another. The brothers and a cripple they seem to have adopted who isn't all that crippled except when it matters, are bootleggers in a southern US area I wasn't paying enough attention to remember. But more on my distractions in a minute, true story. The local cops are on the take until Guy Pearce's weird prohibition officer comes to town. Oddly enough, they don't all get along.

Delivery: One of my exes, whose name I'll omit because I'm a better person than, well, than her, told me Lawless was the best film she'd ever seen. She also said that about The Avengers film and a few others. I should have known right there she was great at telling men they were the best she'd ever met, too. She was slinging poon around town like a dimwitted but entrepreneurial hooker who in an inspired business move, began pimping herself, but never charged. “Customers” were queuing up. It was a few years ago now, but I was old enough to know better and see through it. Especially after the first time. It broke me for a while, but I'm better now. True story.

Lawless has a huge cast: Tom Hardy, Shia LaBeouf, Guy Pearce, Gary Oldman, Jessica Chastain, Jason Clarke, Dane DeHaan, Noah Taylor and Mia Wasikowska. Ah lovely Mia. She falls into the golden middle of that famous Venn diagram between talented actors and women I find sexually attractive. Good news of such magnitude she has ne'er heard before. I mean it; she has absolutely no idea who I am or what my opinions are because I never leave the bedsit except for when I run out of goat's cheese, which I eat a lot of because it is delicious and surprisingly not that dear. Can you get deer cheese? I'd eat it.

Sorry, back to Wasikowska. Associating this film as I do with that ex, every time I looked into Mia's beautiful eyes in Lawless, I felt a fleeting memory of that love. I remember that feeling, the inner strength being loved brings, the closeness, the joy; so distant now. Bottoming out on discovering her lies, the emptiness of it. A rare mix of hatred and embarrassment, of feeling violated and worthless. All this passes, but makes way for a disquieting pain. A pain which burned for an age, it seemed. All this in a heartbeat, I look at Mia Wasikowska's eyes, and I can't bear it. Why do we do these things to one another? Well, I know why my ex did it; sausage meat, couldn't get enough of it. A pathological passion for penis.