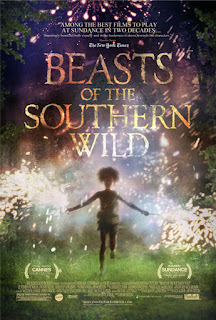 Tagline: “Discover The Most MAGICAL Film Of The Year.” Really, do. Although, allow the RANDOM capital letters, you're not writing for givemesport.

Premise: Six year old Hushpuppy lives in The Bathtub, a ramshackle village in a bayou in the south, presumably near New Orleans (although that's never outright said). Her father, Wink, is an angry man who instils a fierce independence into his young daughter with tough love as their family and the community face severe, unwanted change.

Delivery: Beasts of the Southern Wild has been on my to-watch list since I went to America in 2012 to form one half of the on the road Team GB pool squad. The team, consisting of Lewis and me, was picked by Lewis and me, and we pissed off frat boys for a 6000 mile distance as we travelled the South Eastern states. Everyone I met out there, frat boys excluded, told me I had to see Beasts of the Southern Wild. While I liked the look of it, it never really jumped out at me as one to sit down and watch. Until about a year ago I bought the Blu Ray, and again, that sat on my shelf, I would say collecting dust but I've got a lot better at cleaning as I've gotten older. Last night, I thought I'd put it on and see whether it grabbed me.

After the first five minutes I was glued to it, Beasts instantly made me smile, a warm joy rushing through my tiny corporeal shell. Weirdly enough, I rather liked the feeling, and decided to stick with the film. The photography is brilliant, a cinema verite style with plenty of grain created by shooting on 16mm film and blowing the image up. It looks beautiful, ethereal, ephemeral, enigmatic and amplified by Quvenzhane Wallis's child like but imaginative narration. The music is wonderful, and again dream like as Beasts slips between non linear childish fantasy and straightforward drama. Early on Hushpuppy's voiceover states,

“The whole universe depends on everything connecting together just right”

Which is how Beasts feels, everything is coming together just right. Until suddenly it isn't, and even though we're seeing the story from a child's perspective, a child with a vivid imagination, the real world pierces the magic of her existence. Wink, Hushpuppy's father is an angry man, but he has a lot to be angry at, and at heart cares deeply about his daughter. There are obvious, not even subtle enough to be sub-textual mentions of the environment, global warning and man's destruction of nature, but Beasts is about what humans can't control as much as what we can.

Overall the film is entrancing, as powerful as it is fleeting, as life affirming as it is desperately sad and painful in places. The first few minutes are not the only happy moments, but every smile is earned and all the better for it. I watched with my feelings veering recklessly between joy and sorrow. Sometimes both co-existing in my hollow little head like old lovers who live their own lives but still tolerate one another. I'll coin the feeling happysad. Ok it's not really a term, its a very lazy portmanteau, but that's how I felt throughout; with happiness taking over at the finish. I am so happy I finally watched Beast of the Southern Wild.

Bedsit it? Go out and buy it immediately. It's the kind of film anyone over the age of about ten or eleven might enjoy. I mean literally anyone. Beasts of the Southern Wild is beautiful and I think I love it, and I've had a great start to the year with Hostiles, Three Billboards, Raw and one other which I haven't written up yet so won't spoil, all really impressing me. 9/10
Labels: Adventure Beasts of the Southern Wild Bedsit Bedsit Cinema Drama Film ratings Film review Independent Movie Reviews New Orleans