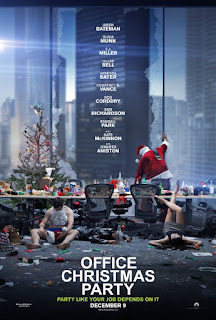 Tagline: “Party like your job depends on it.” Utter nonsense, but amusing.

Premise: Jennifer Aniston's uptight and professional Carol and her idiotic but kind hearted brother Clay, played by T. J. Miller, are the children of a dead tech business owner. The company is struggling and Carol wants to downsize Clay's branch, which means no Christmas party. But Clay wants a Christmas party. It's no spoiler to reveal there is a Christmas party. That's all you need to know, honestly. Probably more detail than you need, if I'm honest.

Execution: Office Christmas Party is directed by Josh Gordon and Will Speck, who directed Blades of Glory, one of the best comedies of the century in my opinion. But festive comedies can be wildly unpredictable, sometimes cynical cash ins. The cast for this are pretty strong, Aniston has made a decent niche for herself in these edgier offerings post Friends, Jason Bateman is good old reliable Michael Bluth Jason Bateman, Miller is good, and there's US comedy bit players all on form such as Jillian Bell, Rob Corddry, Randall Park and Kate McKinnon.

I'd be doing this film, or any decent comedy really, a disservice trying to regurgitate its one liners in text. Also for some reason, when reviewing comedies I feel bereft of jokes, possibly it's the feeling that piling silliness upon silliness isn't needed, or even funny. It's much better when I'm venting my spleen over some pseudo intellectual piece of crap the Guardian gave a reach-around to in their review.

Office Christmas Party really didn't have to be set at Christmas, but I suppose the festivity lends it a uniqueness which picks it out from the other ensemble comedies of the same ethos. Is ethos the right word for dick jokes? It's a little grandiose, but this is my blog so ethos it is. The jokes come at you fast enough and from enough angles, that despite the not exactly high brow nature of them, and somewhat throwaway feeling to the film, you should laugh long and hard enough to come back for more. Ethos.


Bedsit it? Crass, silly, puerile, completely unbelievable and very funny. Office Christmas Party is never going to be a classic, but has enough jokes you could easily return to it every few years and enjoy some Christmas chuckles. Not one to put on with th kids running around. I'd say grandma, but Christmas day in my house involved a conversation about dick pics, and grandma was present. 7/10
Labels: Bedsit Bedsit Cinema Christmas Comedy Festive Film Film review Jason Bateman Jennifer Aniston Office Christmas Party