How I Score Bedsit Cinema Reviews 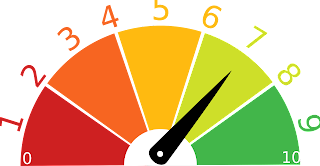 Those of you who know me will know I'm a very serious man. Hard to part from his deep intellectual thought. Therefore this blog, where I write about films, may have been a surprise. A little about films, an awful lot of me moaning about various things under the banner of a film title. Still a surprise though! I score the films I watch, which if you know means you read to the end, and I thank you for that. Provided you didn't skip to the end just to see the score. Any idiot can grade a film, only this idiot does it as an afterthought to four paragraphs of waffle grossly unrelated to the titular film.

The point to this post is that I got some flack from my cousin about my scoring. By which I mean he complained like a bitch on heat with no leg to hump. He's a difficult cunt, who likes to grow his black hole of empathy by consuming other people's joy in his wake. Fittingly he's a doctor. He's also rather funny and kind of had a point, but don't tell him I said that, it’ll go to his head.

My cousin's issue was that I said I hated The Killing of a Sacred Deer, but still gave it five out of ten. I thought about it later and I understand his complaint now. Said cousin also, among other acts of obstinance that evening, pretended not to know who Anthony Joshua was just to annoy me. So you see why I initially didn’t take his scoring comment very seriously.

Once I realised the value this score would have to all four of you who read my film blog (it’s gone up one since I started counting my own views), I studiously sat down and scribbled a highly scientific formula that best describes how I attach a numerical value to a film. It took me all night, I laboured over the minutiae, because that's where the joy is in film, surely, emotiveless assessment.

I assure you everything in my system is all completely formulaic and to the letter; I’m an awful pedant. No really. None of this has been done with any emotion at all, much like my cousin operating blithely on a patient, I imagine*. Hard, scientific, bookwormish rigidity. That's a bit of me that is.

It is important to me to try and see the beauty, or at least small moments of humour or good in a film, which is probably why I'm a kind marker. No one knowingly makes a horrendous, evil film, with the exception of Goebbels and Chazelle**. I'm a film lover and try to believe where possible that no one has tried really to piss me off, but more on that in the Bedsit Cinema Awards, coming soon. Here's my scoring system:

1- So bad I turned it off, nothing of merit and/ or offensive. I may hate this film forever, and everyone connected with making it.
2- Very bad, I want the time back I spent on it. Even if I lasted five minutes. Which is a whole unrelated joke.
3- Not good at all. But I managed to finish it.
4- Bad but with possibly one redeeming aspect.
5- Possibly bad spells, possibly a bit boring, possibly just not for me.
6- Enough good about it I watched contentedly, even enjoying much.
7- Entertaining film that I enjoyed.
8- Very entertaining film I loved, and will be keen to repeat view.
9- Brilliant film, contender for film of the year.
10- One of the best films I've seen this year and potentially could go in an all time list down the line (longevity counts strongly for me, scores fluctuate over time)

*For legal reasons I have to say that my cousin is probably a competent doctor.